A glimmer of hope

Okay, I am trying to not get my hopes up but for the past few weeks Irish as been sound and not sore. I've been riding him and he feels like his old self- forward, keen and, well fun.

He looks fabulous- he actually has flesh on his bones (that's another post). I've been riding him off and on for the past several months but not too hard and mostly walk. It was NOT fun at all- he felt sore and it made me feel awful to ride him. The vet had suggested keeping him moving would be beneficial but it was hard to be motivated.

First of all it just feels wonderful to be in a saddle. Second we were schooling which I love. I just stuck to 'Training level' with a little bit of higher stuff thrown in at the walk. Initially he was a bit resistent to the bit but I know he needs his teeth done (Irish needs to have his teeth floated every 6 months ((floating is where the vet or equine dentist files down sharp edges that form on the molars)). So I just concentrated on keeping my hands soft and using leg to bump him into the bridle rather then pull. I also have been working a lot on cuing transitions just from my seat. It's working really well for the downward transitions. In the upward transitions we needed to work a bit more. Initially he wanted to hollow and come against the hand but I stayed persistent. I brought him to the center of the ring and did a few turns on the forehand. I find that helps to 'unlock' him and get him listening to the aids. After that he stayed pretty consistent. I love how I can feel his back coming up under my seat. I haven't felt that in a long long time.

I kept the session short as I don't want to make him sore.

This may be a brief remission or his arthritis may have fused a joint and so is no longer hurting or giving him almost a year off allowed the inflammation and injury to heal. Time will tell. For now I'm just going to enjoy the ride. 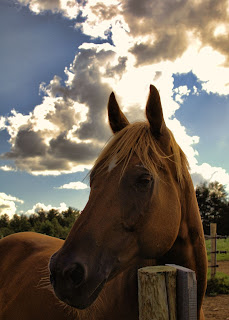