In which I channel Yosemite Sam

This came useful on Sunday when we did a lunge session. He was a bit energetic. To put it mildly. To start I was just looking for walking and halting. His idea was to take off into a power trot. I asked him to slow down but he was stricken with deafness. The last thing I want is a horse that thinks a lunge line is an excuse to run and carry on. Nor do I want a horse to think that my commands are optional. One command I am working on is 'easy'. When I say this I want him to slow down a tad into a more natural rhythm. While I don't want to battle with a horse I have to be in charge. The idea is to make the right thing easy and the wrong thing hard. I brought him in on a smaller and smaller circle until he had to walk. I praised immediately and then let him out on a larger circle.

It worked, somewhat. But I still had the impression that he was blowing me off.
"stop cramping my style mom!"

So I got a little firmer. That's when Yosemite Sam's line popped into my head. The next time he blew me off I said it to myself. And my whole body language was geared to one thing- WHOA. NOW.  I gave a sharp jerk on the lunge line. He came to a halt. Good boy.  that's the hard part for me- giving praise for doing what he should have done the first time. But the only way to learn is to be consistent in praise for good behaviour and correction of bad behaviour. We repeated this until his transitions were sharp and crisp and when I asked.  The task was simple- halt, walk and trot.

Today he was much better but we spent a bit of time in the first few minutes reviewing the lesson. Except this time he was appalled that he couldn't stop when he wanted to.  However, it didn't take long for him to figure out that going with the program led to much less harassment. 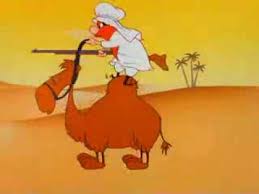