A friend of mine (one of owners of the company that bred Steele) recently imported an Andalusian stallion from Spain. She's had him for a few months and yesterday I had a chance to go and meet him.

Because Karen lives a good 90 minutes away we don't see each other much but I always enjoy talking with her. I arrived just as she was finishing up her ride on Kalimo VIII. I had my camera with me but was enjoying watching them so much that I didn't take many photos. 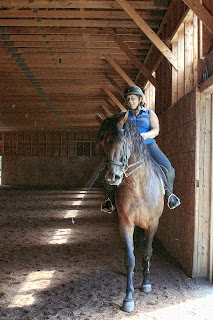 Not only does he have a lovely conformation and movement but I was impressed by how tuned in he was and how hard he was trying to figure out what Karen wanted. After she dismounted I came up to see him. I know he's a stallion but he was so calm and friendly my heart was taken immediately. Also, he's a rich bay- my favourite colour.

After we had an amazing lunch on her deck and chatted away. Before I knew it, it was late afternoon and I had to head home. But not before planning another get together. I am working on a plan so that Stelle can watch him and hopefully absorb some information.

As opposed to absorbing grass.... 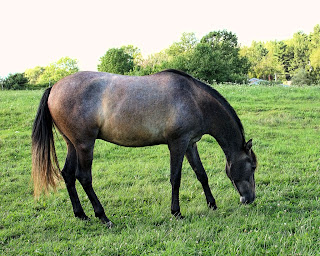