How Steele learned to love the hose

As you may remember, Steele is NOT fond of being bathed. Getting him used to the hose being used on him has been, well, interesting. But I know that consistency and persistance is the key. Also taking advantage of the context helps too.

That's where the weather comes in. We've been having some extremely hot weather. The weatherman appeared to be positively gleeful as he proclaimed "and the maritimes have the hottest weather in the country for the 3rd day in a row" The nice thing about living in the maritimes is that the weather is supposed to be temperate- not too hot or too cold. So we're not used to extreme heat. Keeping in mind that over 30 is extreme for us (in the 90's). Add in our humidity level and it's awful. 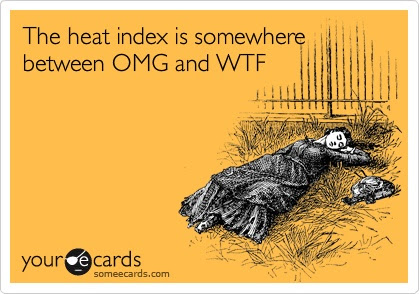 Steele seems to be minding it much more than Irish. On thursday I saw that he was warm and sweaty so I brought him out to give him a bath. I figured that since it was too hot for exercise we'd work on tolerating the hose. He knows what the hose means and he danced a bit when he came out. My training technique is pretty simple- gradual desensitization. I turned it on a gentle shower and began with his feet. He danced away. I encouraged him to stand still but what ever he does, I don't turn the water off. Otherwise he's reinforced for doing the wrong thing. When he stands I praise him, let the water run for a bit and then turn it off. Rinse and repeat. This time he danced a bit and then I put the water on his chest. He came to a complete standstill. It was cute- he was all 'oh oh oh. stop it! stop it!'
and then he was 'ahhhhh. that feels so good'

I gave him his bath and put him away.

Today when the horses were out I got the tractor out to do some work on the riding ring. I shut the horses in the large paddock so I could get to the ring. They have water there and I figured that they would be okay while I worked.  While I was working I saw Steele and Irish running a bit. I think that the flies were driving them crazy and they couldn't get to the shelter of the barn- I had it closed off. The stinging flies are also fierce. As soon as I finished I let them into the barn and then followed. I saw Steele breathing heavily. He took a drink. I watched him and his breathing seemed to worsen. He was dripping with sweat. I did not like the look in his eyes. Even Irish seemed concerned.

I went in with the halter. At first he was a bit resistant to being haltered but I got it on him. I brought him out to the sun. His sides were heaving quite a bit. I turned the hose and this time threw my 'technique' out the window- I started right at his neck and chest. The look on his face was one of instant relief. He stood stock still and raised his head up. I kept the water running on him moving it gently down his neck to his chest and back up. He reached over and began to nuzzle my ear. He seemed to me like he was saying 'thankyou'. I did his sides and then up between his hind legs. He stood completely still and then lowered his head to graze while I continued to let the cool water run over him. When his breathing settled I brough him to the barn. He stood in the breezeway while I scraped the water off. I then took him out to the front yard under the big tree. With the shade and breeze he perked right up. Once he seemed to be good I brought him back to the barn.

I just checked and he seem to be fine. I guess I'm going to have to keep my eye on him with heat. Perhaps as he lightens he will find it easier. It's a good thing that my 'spanish horse' is not in Spain!