Monday started like any other day- the alarm went off nice and early and I went out to feed the horses and clean their stalls. Both were happy to see me and cleaned up their breakfast. That's not unusual for Steele but Irish is not always the best eater.  I let them outside and went to work.

After work Ed and I went looking for a lost shoe (Irish's) in the paddock. While we were walking he commented that he had seen Irish laying down earlier. This is unusual, as he rarely does this. But I didn't think anything of it. The shoe hunt was successful so I brought Steele to ring to do some work inhand. He was fabulous. He kept right to my shoulder whether I walked, trotted or halted. He even skidded to stay with me and my lead line was loose 90% of the time. I played with turn on the forehands. No problem going from the left but some difficulties to the right. He just stood there looking at me while I poked him ineffectually. I stopped and did some thinking. I realized that to move away he needed to move his feet and he was not understanding what I was asking. So I decided to ask him after getting his feet in motion:  I asked him to move forward a few strides and then 'half- halted' with the lead and used my hand against his ribs. He stepped over immediately. I stopped and gave him lots of praise. After a couple tries this way he had it. We also played with the caveletti- walking and trotting over it (at it's lowest setting). After a bit I let him off the lead so he could help trim the grass along the edge while I did some rock picking. It was so cute- when he saw me on the other side of the ring he trotted to me, going over the pole. It was like he was showing me 'look I can do this'.

After I brought him back to the barn for supper. Irish seemed to be withdrawn.  At first I thought he was upset over being left behind. But when I fed him his supper he sniffed it and turned up his nose. Uh oh. He stretched out to pee but didn't really have any. hmmm. I decided to take his feed back and let him out to graze a bit- still thinking he was upset. In fairness he can get quite upset easily and be too agitated to eat. Usually leaving him for bit settles him down. He walked out lethargically, went to the field and laid down. Now I'm sure something is wrong. I texted Ed to come out to help and while looking for my injection of Banamine I called the vets office. After being put on hold (which, by the way was irksome, I explained that I had a sick horse but apparrently she had a person buying food and put me on hold) I got through. The vet called me back right away - he knows me well enough to know that I only call when there's reason. He said to go ahead and give him the shot and let him walk around but not roll. While he was laying there I put his halter on and had Ed hold the lead while I gave the injection. Irish didn't even move but he's very good about this sort of thing. We got him up and I took his vitals- temp normal, breathing 16 breaths/minute which is a bit high for at rest. After about 30 mins he appeared to feel better and began to graze. I left him out in hte field close to the house so I could keep my eye on him.

The whole time my brain kept throwing up images of worst case scenario. It's amzing how that happens- I was practically in tears thinking of all the things that could go wrong. I pretty much had his burial spot picked out! Why do we go there with the ones we love? It's not really helpful.

A few hours later and he seemed to be pretty normal- except no poop. I brought him in and checked him every hour. He was bright eyed and happy for the attention, mildly munching on his hay. I called the vet back and we decided that he didn't need to come out but would bring the stuff home and I could call the answer service at any time and he'd be out. I set my alarm for midnight and went out to check on him. He was sleepy but willing enough to visit. And, joy of joys, there was poop- smallish and a bit dry, but poop. This meant that his gut was working. I gave both horses a treat and a pat on the nose and went back to bed. At 6 there was more normal looking poop. And he was interested in breakfast. He only ate half but I decided to not worry about it.

He's been normal the rest of the days. I don't know why he colicked. But my fear is that it's related to his previcox- it is a nsaid and can cause ulcers (although let likely to then other nsaids). However he needs it to stay pain free and able to move. I feel like I'm walking a tightrope of balancing quality of life, soundness, safety and health. Sigh. I'm not ready to make the hard decision yet. But there I go again- disaster thinking. 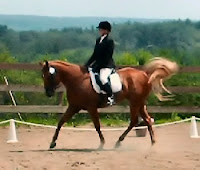