It seems that the way I've been working with Steele is to gradually get him used to things so that when I introduce something new it's not that big a deal.

I took advantage of the post-Christmas sales and bought him a cheap schooling bridle and a very gentle bit. the idea is to spend some time getting him used to having it in his mouth and, once he's used to lunging having him get used to working in it. There is also a man in the area who is an excellent ground driver and I want to get him to start Steele for me doing that.

This is the bit I bought:

A happy mouth d ring revolver bit. I believe it will be nice and gentle for him to learn with.
Over the past several months Steele has gotten used to me putting a halter up over his ears and will open his mouth when I put my finger in the side of it. Last week I decided to try the bridle and bit. Standing beside him I slipped it on. He was definitely unsure as to what the heck I put in his mouth. I let him into his stall to hang out a bit with it. While he wasn't impressed he was not upset nor was he worried.

here's a photo of him in his new bridle: 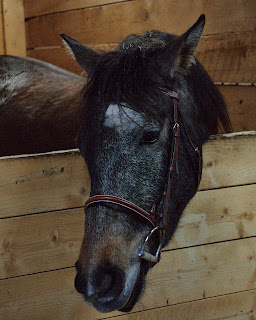 Fitting him will not be easy. he's too small for a horse size but the cob size is a bit tight. I know the kind of brilde I want to get him. It's like this:
http://www.jhequestrian.co.uk/jaguar-flat-hunt-bridle-special-offer-6269-p.asp
Essentially a flat bridle in black. I quite like the look of the flat bridles. I have had no luck finding one here though. but I have a bit of time to look around.

What kind of bridle do you like?
Posted by TeresaA at 11:25 AM