On being a hairdresser....

Are you old enough to remember this toy:

It's a barbie hairdresser toy. The idea is that young girls would learn to make fabulous hair styles preparing them for either a career as a beautician or a fashion model. As you can imagine I totally sucked at this. While I did have various barbies the reason was that they could ride my plastic horses. At my peak point I had 8. If one broke a leg I cried for days. My mother probably blesses that fact that Breyer horses came out when I was an adult.....
I think that the hairdresser barbie lasted a few months until the day I decided that she would look better with short hair. After you shave Barbie's head what is left to do with it? Besides it was a weird toy and sort of creeped me out at night. I mean a disembodied head sitting on your dresser? Who wouldn't be a bit freaked out? I don't know what happened to her- I suspect that she's in a landfill somewhere. It was prophetic really- I am neither a beautician or fashion icon.

This is also a good time to confess two things:
1. I like to braid horses. I find it soothing to do prior to a show. I like how they look.
2. I like short manes. I pitied people who had horses with long manes. I mean, how do they cope? All this hair flying around while you're trying to ride and preparing for shows. I was smug in my superiority of having a horse with a short mane.

I then bought an Andalusian.

Andalusian horses are supposed to have long manes.

So now I am conflicted.

I like short manes but if I'm true to the breed Steele should keep his long mane. Having learned from the barbie toy I know that if I cut it there's no going back (see no part of life is without a lesson, it's just that sometimes you need to wait to figure out exactly what the lesson is). Of course, unlike the barbie head, Steele's mane will grow but I may not have the patience for it.

I do believe that it's important to learn new things so I have decided to leave his mane alone and use this winter to learn how to do a running braid. I have googled and watched videos on youtube. It doesn't seem hard but I know that my skills with long hair are not anything to write home about. I have been doing short stints with his mane but last weekend I decided to do the whole mane.

It seems that Steele patience for standing still while his hair is done is as good as mine. I can appreciate my hairdresser's perspective as she's reaching for the flat iron or hair spray or even the mirror to show me the back while I say 'no no, I'm sure it's fine as it is and I really have to get back to the barn.......' It was kind of like a dance- Steele stepping forward, me going with him clutching his hair in a desperate attempt to keep the strands separated.

This is the result: 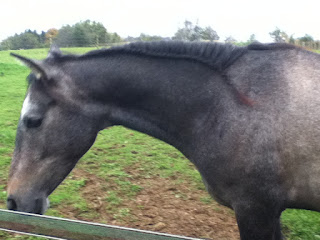 The photo is not great- I took it with my ipod and he had no patience to stand still while I took it. :)

it lasted about 2 hours. So I will have to work on making it last. If you have any advice I would appreciate it very much.