In which Steele is an innocent victim

I really love my barn set up- each of the stall opens up into a small turnout. From there the horses can go into  one of two fields- depending on which gate I have opened. It makes it simple for us with our work schedule. The stalls act as a shelter if the weather is bad. At supper time I prepare feeds and bang on the metal dish and yell 'supper!'. The horses come running, each to their own stall. I feed them and then shut the outside doors. It's a system that works very well. It took a while to teach them to go into their own stall but they've had it down for months.

Tonight I followed the same routine as always. The horses came running and I put the feed in their bins.Now they are not fed the same- Irish gets a sweet feed + beet pulp and Steele gets a yearling feed + beet pulp.  However, when I went out to shut Irish's door he decided that he wasn't ready- he bolted out his door and then bolted into Steele's stall. He pushed Steele away from his feed bin and started eating. Steele came out and started to go into Irish's stall.

'Uh Uh' I said, 'We're not playing musical stalls' and I closed the bottom half of the door.
Steele goes back into his but Irish won't let him near the feed. He comes back out and looks at me pleadingly.
His eyes filled with tears 'but I don't have anything to eat!'

(okay, I know that horse's eyes don't fill with tears but really, if you could have seen his face!)

'Irish' I say sternly "Get out of there RIGHT NOW'

Irish came out and bolted to his field.

I sighed. 'How does he know that I am getting ready to go out and don't have time for this nonsense'.

Steele started to go with him but then thought better of it. He ran into his stall and had his supper. He looked relieved.

I looked at Irish standing out there. He looks back at me defiantly. d'Arcy looks at both of us. I had just decided to go back into the house and leave Irish to his own devices but he must have sensed it because he came back down and walked into his stall as sweet as you please.

Hopefully his rebellion is short lived. Two brats is more than I can handle. 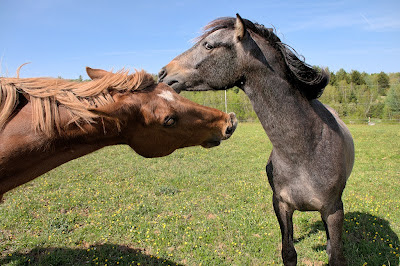