About 20 years ago I watched a local trainer working with a 2 year old QH Gelding. This gelding was being trained for halter classes. I don't know much about halter classes but the trainer was working on getting this little gelding to stand still. The trainer was over 6 feet and the gelding about 14hh.

This is what I saw:
The trainer would ask the horse to whoa, which he did quite obligingly. The trainer would place his feet square and then either stand for a few minutes or walk around the horse. If the horse moved any of his feet a fraction the trainer would kick him repeatedly as hard as he could. The lesson would then repeat. This went on for a long time. I spoke up to the barn owner but as told that I didn't understand and that this guy was a great trainer, his horses were the best broke ones around. I believe it. But the word I would use now is 'broken'.

One of the things I love about having a youngster is that I don't have to hurry. I can take the time it takes for him to learn. This seems to be working for us. I also am using reinforcement for the behavior I want not punishment. For example, when I groom him he loves for me to be really strong with the curry comb on his whither. He wants to turn around and groom me as well. His intentions are good but I don't need his teeth marks on my back. So when he turns his head I stop. When he turns his head forward I go again. It's funny to watch him make faces and 'air groom'. :D

He's learning to stand still while being groomed. I also leave him in the cross ties while I pick out his stall and then put his hay in for the night. He's learned to not paw while standing there. Well mostly. But he's praised for now pawing and ignored when he does. He doesn't like to be ignored.

I am sure that I will make mistakes but I prefer to do it this way rather than the way I saw the trainer operate. Of course I'm not under pressure to produce a ridable horse for anyone but me.

This is a photo of Steele shortly after he came home- learning to cross tie: 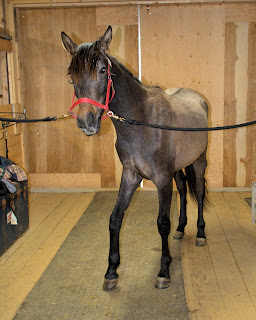 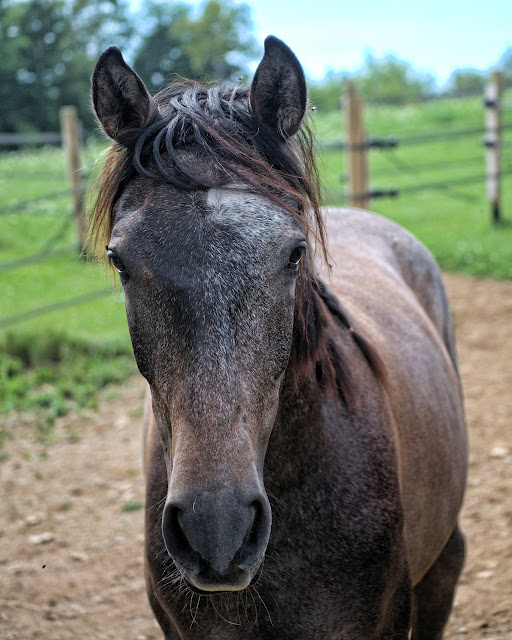