Yesterday I went to visit a friend who also happens to be partners in the business that owns Steele's dam and sire. http://www.doscompaneros.com/our-horses

Steele's full brother was born in June and I wanted to meet him. He is a total sweetie and quite sociable. Sound familiar? It seems that he might be a bay as he sheds out. I also think that he may end up bigger than Steele.  I have to say that he's the second cutest foal of this breeding I've seen  ;)

Here he is with his dam. She's a beautiful horse and about 16.1 hh. 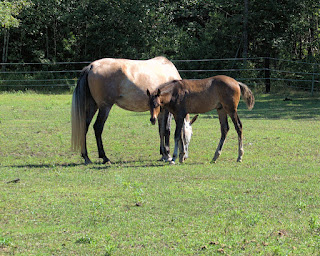 Look at that face- who could resist???  Just like his brother he's very sociable and had no issues leaving his dam to meet a new fan. 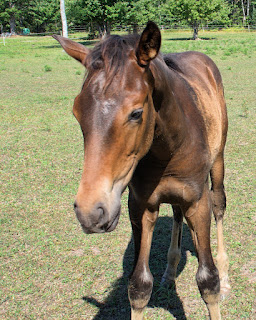 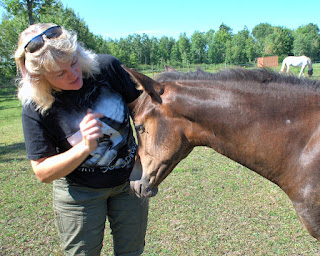 This is Steele's sire- Fierro. I see a strong family resemblance. 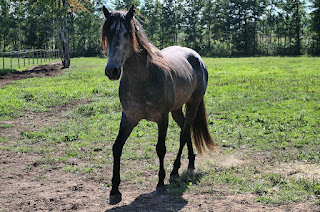 Not the best photos, I know, but the sun was bright and it was hot. :) 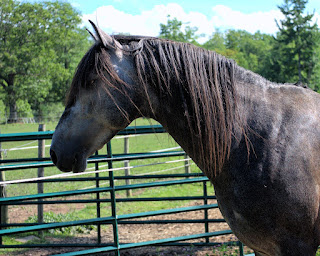 And just so Steele doesn't get too upset that this is not about him, our latest adventure involved an escape.

I had been out with the horses doing some stuff and must not have latched the gate properly. I was in the house getting supper ready and I head my Aussie, Belle barking. It wasn't her 'we're being invaded, man the machine guns' bark so I went outside to see what was up. I could see Irish and Steele out behind the barn grazing.

'Holy crap' I said and grabbed my shoes and headed to the barn. I grabbed some grain in a bucket and sauntered out the back.
"Hi" I say to the two.
Irish looks at me like he's saying 'oh oh. It wasn't my idea'.
Steele was totally cool- 'hi there. Just having a look around'

I show Irish the grain and he follows me back to the paddock. I figured that Steele would follow. Nope. He decides that he has to climb the massive dirt pile behind the barn (it's from the excavation and we're slowly moving it and screening out the topsoil). 'Hey Irish you can see everything from up here'.

'Steele come down'. I shake the grain hopefully.
He meanders over to the muck cart and starts nosing it around.
I sigh and walk up to him. He scoots into the barn. Success!! I follow and shut the door behind me.
Steele wanders around and checks everything out. 'How come the hay is so far away from my stall?'

I go up and put the bucket to his nose and the penny drops 'FOOD!' He follows me into his stall. I shut the door and breathe out slowly.

In talking to my friend, it turns out the Fierro also liked to leave his paddock and nose around. He also explored anything within reach.
Posted by TeresaA at 10:17 AM