We've been having an easier winter than normal and I've been taking advantage of it as much as I can.  Earlier this month Shanea had contacted me and we had arranged a lesson. The day was gorgeous and the ring was perfect. Alas, life intervened and I had to cancel. I was disappointed but also did not regret giving up the time. Sometimes you have to suck it up.

I figured that I wouldn't get another chance to ride in February but it turned out I was wrong. Things have thawed again. In fact my ring went from being coated in ice to being actually too mucky to ride in. I tried Sunday and Monday but it was too soft and slick. I did manage to get some light ground work in but couldn't do too much. One thing I've been doing is tacking her up every time. I'm trying to close the gap between how she is during our ground work vs under saddle. Sometimes I don't ride. Sometimes I do. And sometimes I just hop on and ride 20 feet and hop off. 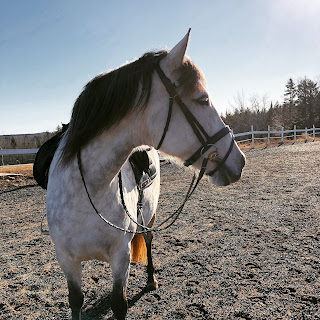 Shanea offered to teach me on Tuesday if my ring was okay. Fortunately it was. The nice thing about my ring is once the frost is out of the ground it firms up pretty quickly. Not that it was perfect today, but if was okay for walking and trotting if we avoided a few spots.

I brought Carmen up to do some ground work first. She was clearly trying to tune in but was a bit distracted. I could hear a machine that I thought was an ATV in the woods. As we worked the noise became louder and more distracting. Again, Carmen was not freaking out but she was definitely aware. It got louder too so I decided to do what another horse would do- I pricked up my ears and marched to the end of the ring to see what was making the noise. Carmen walked behind me with slack in the lead. I stood there with her at my shoulder.
Me: You know, it sounds like a helicopter
Carmen:  *shrugs*

And that's what it was. A helicopter came over the trees, fairly low. Carmen and I watched it pass over and I gave a wave. It disappeared over the horizon and I took her over to the mounting block to get on.

We were walking a bit when Shanea came up. I told her what we've been working on and where we are. Carmen is definitely out of shape so I didn't want to push her too hard. My goals were to work on softness and bend and get us started on the right track.

As a lesson it was nothing to really write about and it was totally awesome. Shanea was very positive - well she's usually positive. But she was happy with how I was doing rating her speed with my seat and how I wasn't letting my body tense or try to hold her. We spent a lot of time at the walk and then picked up a trot. Carmen would spook a few times (very minor) and I didn't grab her once.

My half-halts are a lot better. We picked up the trot with the goal of being steady and straight. And really it was not bad at all. I was impressed with how soft she was in the bridle and how hard she tried to listen.

I was happy with how I didn't grab her or be too stiff. We were having fun. Carmen had lots of breaks. At one point I stopped and dropped the rein to have a rest. I was talking to Shanea when Carmen marched right up to her 'okay, you have to love me now.

She might be getting a bit addicted to the praise.

Here's some of our work with transitions and half-halts.


We worked for about 40 minutes, which felt like enough. To cool off we practiced some turn on the haunches. I found that she tended to drop onto the forehand and pull herself around rather than turn softly. We tried it a few times and, frankly, it wasn't very good. Carmen was getting resistant but I sensed that the resistance was from not understanding. Shanea had me walk down the long side, do a few steps of half-pass and then ask for the turn. This made more sense and she flowed a bit better (albeit widely). After a few of these where she was starting to understand we stopped. I know that the next time Carmen would be able to take it a bit farther. We finished with the back up which was pretty smooth and straight. I hopped off and I looked at her- she looked pretty pleased with herself.

This mare, guys. I am having so much fun with her. I am excited for this year.