Is There Still a Place for Horses in the City?

Excuse me while I haul out my soapbox. 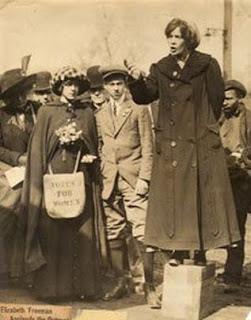 When I was little we lived in the country. Then my parents split up and we had to move to the Halifax. I was not happy about it- I missed the air, trees and open land of the country. Mostly I missed the animals. And of that I really missed seeing horses. Like many of you, I was 'horse crazy' when I was young. (let's face it, I still am).

However, in the heart of the city was this magical place called Halifax Junior Bengal Lancers. I would look out the car window straining to see the horses. Like many families, money was really tight and riding seemed like an impossible dream. However, when I graduated from University and was preparing to head off to graduate school my mom asked me what I wanted as a gift. Without hesitation I told her I wanted to go to 'Lancers' for their adult 'learn to ride program'. She was taken aback but paid for it without hesitation.

At Lancers I learned about how to groom, take care of tack and to ride. And I have not looked back. Really, this 6 week program set me on the path to where I own my horses and farm. I am not a lone. Hundreds, maybe thousands of people have learned to ride since it was established in 1936.

Halifax was built on a peninsula and now sprawls far past that. However, land on the peninsula is at a premium and there is less of it. It won't be a surprise to hear that the land that many are eyeing the land that Lancers is on with a view to it serving a different purpose.


The most recent proposal is to cut off part of the paddock (which doubles as a turn out and outdoor riding ring) to build a parkade. 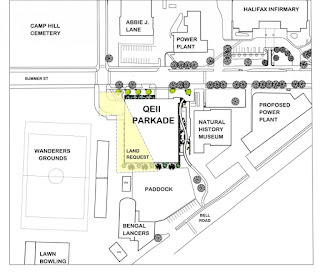 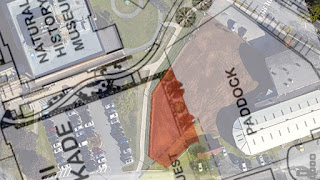 Horse people can immediately see the problem with this. The paddock will be made significantly smaller. As well there is the risk to the horses (and riders) while it is being built. It's not rocket science to know that to actually construct this the machinery will have to be in the paddock during building. Which means that during construction the horses cannot be out. After, there will still a risk having the parkade that close.

As always, these things are never simple. The city/province is not evil- there is a lack of parking downtown, especially for the hospital.  I can totally see why someone may look at having horses in the downtown as frivolous and unnecessary. I can even see that some people may look at it as elitist and for rich people And wouldn't the horses be happier out in the country?  Isn't that where they belong?

But, I think we lose something if Lancers is forced out of the heart of Halifax. They are part of the city that prides itself on maintaining its historical roots.

There are many horse crazy children (and adults) in the city. I think it's important to see them even if they never ride. If Lancers hadn't existed I wouldn't have been able to ride there. Travelling out of the city to ride was not an option for me. And no own would describe my family as 'rich'.

Losing this for a parking lot makes me sad.
Sad for the people who won't be able to ride anymore.
Sad for the horses who might get injured.
Sad for the loss of history.
Sad that we have lost our connection with animals.

It makes me think of these lyrics:
"Don't it always seem to go
that you don't know what you've got till it's gone
They paved paradise
and put up a parking lot"

I have no input on this decision. I don't even live in the city anymore. But Lancers is asking for help and if you want to check out their website.
Posted by TeresaA at 8:27 PM