Come Dance With Me

You may recall that I have signed Carmen and I up for a charity show in September.  I also talked my friend, Karen into showing as well. In a text exchange she was wondering whether to do one test or two.  I dropped the suggestion that it would be fun for us to do a Pas de Deux in honour of our friend Janet who is battling cancer. After a brief text silence I received two back to back:
Head explodes
*pause*
It could be fun.

Now doing a test to music has been high on my wish list for a long time. This fun show seemed like the perfect time and doing with Karen and her stallion would make it even more fun.  The tricky part was finding time to get together to practice. I have a full size ring so it made sense for it to be here.

Karen found the music and we played with some choreography via google docs and I tried riding to it to figure out the timing. Yesterday evening she arrived so that we could spend Sunday morning pulling together the choreography.

Because that should be enough time, right?

Irish was so excited to see Kalimo. He's so in love it's pathetic. Carmen could have cared less.

So we started with the first part and that fell together quite easily. The canter work was much much harder. Carmen got a little tense with the whole thing and was ready to quit. At one point we passed Kalimo cantering in opposite directions and he let out a big fart. It scared Carmen and she bolted. Karen looked around to see us at the opposite side of the ring. It was hilarious, even though I almost came off.

We rode and discussed and I began to wonder if we'd figure it out. Finally we had a plan and we rode it through the music and it worked! I then asked Ed to come up and video it so we could review it. AT the end he said 'I expected that I would be trying to conceal my laughter but that looked good'.

Oh ye of little faith.  Just because we said that we weren't sure what we were doing......

After we were all exhausted.

After, Carmen and Kalimo went out to the field to have a rest while Karen and I reviewed the video and ate the delicious lunch that Ed made.

Then it was time to go home. 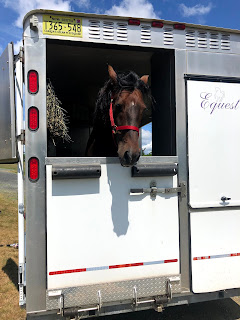 It was so much to play with this. We will practice it on our own and, hopefully, have one more chance at a rehearsal. But like Karen said, this is more for fun and love then anything else.

So if you are at the show in September you will see us debut our dance number. And just to get you interested, here's a small preview:


I am so excited. Janet, I hope that you can come and see it.