Not Just a Passenger

This weekend Carmen and I are headed to a out our third show of the year. I am really looking forward to it. In order to be prepared I had a lesson booked for today.

Life circumstances meant that I hadn't ridden since my last blog post (thursday). I intended to ride on Sunday but when I took Carmen up to the ring they were baling the weeds/dead grass in the next field. When they cut it back on Thursday I thought they were just mowing it to start getting it back. Right now it's mostly weeds with some dried up grass. But nope. They were baling it.  Carmen was bug eyed watching the baler and tedding machines. I decided to stick to ground work and lunging.

The weather has gone from warm and humid to cool and fallish. Combine the weather and the fact that Carmen's suspicions of the field next door were completely and utterly confirmed it had all the hallmarks of being a drama-lama sort of ride.

I started with lunging while Shanea set up some poles and cones to give us guidance.  Carmen was certainly tense and ready to spiral. I even thought about having Shanea ride first. But instead I stayed on and worked through it.

And do you know what?

I might actually be becoming a better rider. Because I could feel my seat locked in the saddle and I managed to stay upright through most of the ride. I keep the rein short and my leg on so that she couldn't find an open door to run through.

Shanea was all about keeping my outside rein and riding her forward. Here she is trying to run away and I put her to work.


There would be an issue, I would fix it , and send her forward. Shanea helped me to see that the answer was always the outside rein and more leg. I have this tendency to hang on the inside because she always bends to the outside and then takes off to the in. I also take my leg off thinking to slow her down. BUT what I need to do is straighten her on the outside and push that energy into forward. This is not new information but I could feel it actually click.

I could feel her playing with the contact- leaning, pulling, retracting. I know I could likely have been softer but she was switching it so much that it was hard. I settled for being steady. I really want to be softer in my elbows but keeping them and my shoulders soft while keeping my back steady with a horse going in 6 directions at one underneath me is one that eludes me.

Now normally, when Carmen starts off at a 10 on the tension scale the lesson is usually a wash in terms of moving our training forward. It's mostly about keeping her brain in the ring and saving my life. But this time, as the lesson went on things began to get better and better.


We were able to work on the finer points of the lengthen and leg yields. 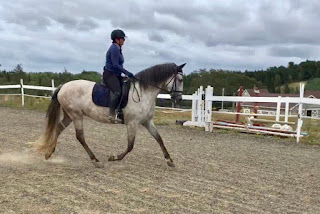 I can feel starting to understand the lengthen. In the leg yield she was more restricted going to the right. I realized that I was holding her with my right knee. Once I took that off she could flow.


Tonight Julia came by to ride after dinner. Carmen looked a little cranky as I tacked her up. We decided to start with a hack in the woods.

Julia: are you going to lunge her first?
Me: No.  She's going to be fine (looks at Carmen), right?
Carmen: I am undecided at the moment.

She was awesome on the hack but more reluctant about going into the ring to school. I kept things light and easy. I laughed that she was like a horse with an angel on one shoulder and a devil on the other.

She would be quiet and easy and then think about not. I tried very hard to clear and be soft when I could. She actually settled really well. I took her into the centre of the ring and watch Irish for a bit. She was quite happy to stand in the end. I could feel her taking teeny tiny steps towards the gate. It was kind of adorable, it was step...pause....nope she didn't notice....step.....

I hopped off and we went back to the barn. I realized that I am feeling less like a victim of Carmen's moods and more like a  mentor who can influence her for good. And when things are not good, I feel like I have the tools to fix it without feeling like I'm going to come off.

On another note, the Pas de Deux at the Canter for the Cure show may or may not involve costumes......(okay, there's going to be costumes. I'm pretty sure I can ride in a dress.......)