SUBMISSIONThe horse’s willing cooperation and harmony with the rider, demonstrating an attentive and confident attitude. Willingness to perform the required exercise as well as operate with correct basics ~ USDF


This week was quite the week. Not only was it super busy with meetings and things, we were able to get the last of our hay in (with no issues on the field). So that's a relief.

I had a lesson planned for Tuesday but that ended up being the day we had to get the hay so I had to reschedule. Shanea has become very busy, which is a good thing but it also makes things a bit tricky in terms of scheduling. She was able to fit me in on Thursday at 7:00. I don't often ride in the evenings. I prefer to ride in the mornings or when I get home from work.  But needs must and all that.

I was excited to have a lesson because it's been a while. Carmen, however, wasn't feeling it. I am pretty sure that she was reacting to past experiences. As well the deer are often active and I suspect that they were in the next field.

I spent some time doing groundwork and then got on. Carmen was clearly worried about troll corner and tried to do her spinny-bolt thing. I put her in a trot on the circle and worked out from there.
Just then Shanea came and we chatted about how things were going. Up until last night I would have said 'really good'.

****aside****
The truth is that Carmen is a sensitive and reactive mare. And while I have done a lot to calm it I never expect that to fully disspear. What I do expect, though is that we can work through it. If I can't work through it then I will go to the ulcer notion but I don't think that's it. I think it's the time and her own insecurity.
***back to the post***

Anyway, Shanea had us break it down to a simple exercise of walking, half- circle, leg yield. That helped settle things quite a bit. I like this exercise- it was enough to occupy her brain but not so much that she was overwhelmed.

While the far side remained a bit of an issue the whole ride we were able to work through it. Her trot transitions were actually really nice. What Shanea noted is that right before she spooks Carmen sprawls out behind and slows her hind end. Then she throws her front around making it hard to keep her underneath of me.

When we trotted by the brush something startled her and she 'bolted'. I put that in quotes because she really just picked up a canter and tried to throw her shoulders around. I sat up and let her canter while trying to get her to bend. We cantered that circle multiple times. Shanea was telling me to let go of the inside rein. Which I understood but had trouble doing because I didn't want her to fly sideways. I was wanting her to bend. But when I did give she settled into the outside rein.

After a while the 'fleeing' became a bit tiring for her but I kept her going and we got her to go down the long side.

I hope I'm not sounding too down on this ride, because I am not. What made me happy was that we were able to work though this. After all this cantering Carmen was much more relaxed. I could feel her begin to relax and feel less uptight.

To help us go down the far side Shanea set up a little grid of raised trot poles. It was literally just two poles but it was enough to keep her occupied. When she tried to put her attention to the outside she would trip herself.

Slowly everything began to come together and I was able to relax with her.

We were able to work on lengthen trot. I was pleased to see that the work we had been doing was paying off.  Carmen was a little energizer bunny and I was starting to fail. I suggested that we might be done but Shanea wasn't having it. So I tightened my sore abs and went back to work. We were even able to work on our free walk.


Not our best work but that I could drop the reins and let her stretch without worrying that she was going to take off.

Even better, I was able to work on the same things today without a lesson. We had some similar issues but worked through it much more quickly.

The big issue is the concept of 'submission'. Now I don't like that word because it sounds like the individual has no right to an opinion. That said, Carmen does need to listen to me and not make her own decisions about when she will or will not pay attention. I recognize that it's a negotiation and that I don't want to shut down her spirit. I just want her to let me direct it and to learn that things actually feel better my way. 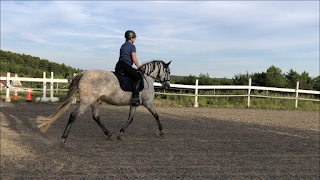