Show Shenanigans: The Further Adventures of Teresa and Carmen

If you recall, in the last chapter blog post I said that Carmen and I were headed to a show. Spoiler alert: I had the most fun I've had at a show in a long time. And I will get in to the details. But for this post I wanted to share some things that happened outside of the show ring.

I headed out late morning on Friday and met up with Tanya so we could travel together. That way is something happened to one of us we would have another trailer and some support. It was uneventful, other than the fact some drivers make very stupid decisions and seem to have no fucking clue that their little mazda won't fare well in a collision with a truck and trailer.

When we got there I decided to join Tanya in the outside shedrow stalls. It was a good decision- the weather was hot all weekend and these stalls had lots of air movement and shade. 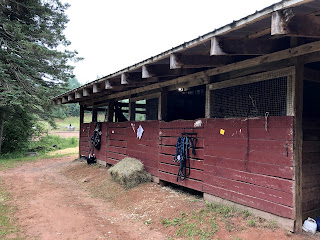 Carmen approved of her new digs and made herself right at home.

2. Calm and confident
She was very comfortable in the ring walking around and our ride that evening was really really good. No shenanigans, just focus and forward.
The next morning I took her for a walk too see the ring and the flowers. She insisted on sniffing each and every one. 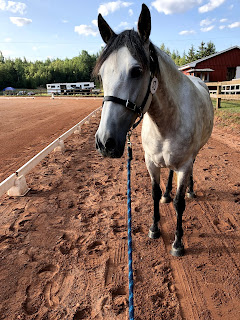 3. Don't fence me in:
I had rigged up a stall guard to allow for more air circulation. I thought I was being clever and thoughtful. However, when I went to refill her water I walked back down the row and saw a pretty grey butt that was not where I left it. It took me a minute to realize that was Carmen and she was out. I put down the bucket and headed slowly towards her when I saw that Shanea had her. It seems that Carmen leaned on the guard and popped out the screw bolt. She just wandered down by the warm up ring and started grazing. It took people a minute realize she was loose.   I tightened the bolt but she did it again later and then again so I gave up. I am a much slower learner than Carmen, apparently.

3. It's not OCD, it's planning:
When it was time to ride I went to put on my 'show' boots only to find that both zippers were broken. I was upset because this was only the second show I had worn them at. Fortunately I had packed my schooling boots so I had to clean them up and use them. Clearly overpacking is a good thing.

4. Just take it
Our ride times were in the afternoon and it was so very very hot. I begged asked the show committee if we could excuse jackets. Fortunately the judge listened to pleas of a menopausal woman and excused jackets. In spite of that, after my first ride I was HOT. Like really hot. I was walking Carmen back to the barn when I saw Maria holding out a small glass of liquid and without thinking I grabbed it and downed it. It was delicious wine and she was handing it to Teri. Fortunately, a fight did not break out and Teri went to get another glass while Maria refilled my glass. Sorry-not-sorry.

5. Friend's look after each other:

Tanya was awesome and looked after Carmen every morning, giving her hay and water while her lazy servant made her way to the show grounds. Nicole offered to wash my show clothes and I am so grateful. So was everyone downwind of me, I'm sure.

On Sunday, I was a bit hotter, a little more tired and more easily frazzled. I came in to walk around the ring when I realized that I didn't have my number. I yelled to Cindy to run and get it while I cantered back out and hoped like hell I wasn't going to get eliminated. Cindy came back with it and said now which side should it go on  and I said hysterically  JUST STICK IT ON!

I trotted back in and when I went by the trailer that the judge was in I heard this amused voice say 'all ready? Do you have your number?
Yes please I said sheepishly and I heard her giggle as I walked down the long side.

I don't really realize it but I tend to keep up a running conversation with Carmen when I ride. Especially in the warm up ring. I guess it can be amusing sometimes. I saw Maria's husband, Isaac, standing at the fence and laughing at us every time I went by. I said something about providing some comedy relief and he said that he wanted to stick a mike on me and record me when I ride. I don't know if anyone is ready for that. Sometimes I have been known to *cough* swear.

8.  Regretting life choices:
Carmen was in full dragon mode on Sunday in our warm up and for our first test (more on that later). I simply rode her forward and let her expend some energy. During the ribbon ceremony she could barely keep her eyes open.

It was a great weekend, full of laughter and friendship and horses. I had a blast. I'm pretty sure that Carmen enjoyed it too, even though she is pointedly ignoring me out in her field today.