Dealing with Distractions and Other Spooky Things

First of I am so excited that I won Equine Pilots Foal Pool! Also, the filly is stunning.

I had a lesson arranged for Friday afternoon. I spent the morning doing chores around the farm. Winter is hard on things and there are always things to fix and clean up. I also got the stuff out of the shed to take up to the ring.

Before my lesson I brought Carmen into the ring to play with some of our groundwork exercises. With TRT the idea is not to desentize horses but to teach them to deal with pressure and stress in a positive way.  I have been moving the actives closer to the side of the ring where we have 'issues'.  The goal is to break the habit that has developed there.

Not to bore you with this stuff but it will become relevant for the lesson post that is coming later.

I set up a simple tarp (which is actually an old horse blanket with all the straps and hardware cut off) between two cones. This was no big deal, which I expected. I'm enjoying watching Carmen take to my questions as puzzles to be figured out. I would say that she's enjoying them.

I then grabbed the plastic bag on a stick. First I did some work with the bag to make sure she remembered. Then I stuck it in the cone and asked her to go through. The idea is that she goes through without me leading her- instead she leads herself.  I am her coach, not her boss in these exercises.

You see that she hesitates and I give her time to figure it out. I am also really working on my body language to be low key and relaxed. You may notice a certain dog who also acts as a distraction. Guinness kept coming in to see if I was done and we could play.

Going on the right rein is a bigger question for her then going on the left. Which tracks with under saddle too. I can also see how she feels good that she figured it out and dealt with it.

I then took the bag out and added the flag. The flag is her least favourite thing. She doesn't like things that flap. I did work with her with just the flag and then added it to the cone.


You can see that this creates more tension and uncertainty. I don't get upset when the gives the 'wrong' answer. Nor do I try to correct it. Instead we regroup and try again. I give her time to think and then increase the demand. Once she did it pretty well both ways I stopped. It doesn't have to be perfect. It just has to be 'better'. Each time we try she starts off at or better than the last time.

I was very happy with her and how she dealt with this. We finished with practicing her draw to the mounting block. I love this so much. The idea is that, rather than being made to stand at the block, we  teach the horse to stand themselves there. Carmen has been pretty good about standing while mounting but with this I find her very relaxed and happy to stand there until I ask her to move.


You can see that the grass is a distraction. Hard to blame her there. After two trials I let her go to graze and relax while I put stuff away. 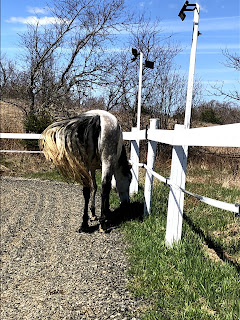 Here she is grazing in 'Troll Corner' with not one concern.