Shanea had to be on the road the next morning by 9 so we arranged for the lesson to be at 8. I set my alarm so I'd have time for chores and coffee. At 7:30 I was getting Carmen tacked up. The air was cool but it meant that the black flies were still dormant.

I did a little groundwork and then hopped on. Carmen felt pretty mellow and a bit behind the leg. This is new territory for me: dealing with lazy Carmen. So I opted for alternating  my legs in time with her walk to get her to take longer strides. It worked really well- she stretched out without protest.

We were heading down into the far corner when I felt her suck back. I looked up and saw a sparrow on the ground in the corner.
Me: Oh look it's a sparrow looking for food.
Carmen: looks suspicious to me
Me: when we get closer he will fly off.
Carmen: maybe. Or maybe he will attack.

We walked closer and he flew off.

Me: See.
Carmen: yes, I scared him off.
Me: you were very brave.
Carmen: I know. *arches neck and prances through corner*

Shanea wanted us to work on suppling and bend. The exercise was to flex lightly to the inside, then straight, then to the outside. Sounds easy but it is actually very tricky because it ask the horse to be soft and following. Bending the whole neck is, in many ways, easier than just at the poll/jowl.

We started at the walk. As we got better Carmen began to really swing through her back. It felt awesome. We picked up a trot and worked on it. The most tricky part was keeping the rhythm so that she didn't interpret the leg aid as 'speed up' instead of 'bend'. Here's a short video of us trying to stay straight. I like it because it shows the effect of the half-halt on bringing her back. I love how soft over her back she is:

We worked on walk-trot-walk transitions. Her up transitions are coming along really nicely: she's pushing from behind and staying in contact. Our downs need some work: we tend to plow down onto the forehand and lose all impulsion. I need to sit up, keep my legs on to support the idea of a forward transition (also don't hold or throw away my hands).  I don't know if it's in any of the clips but a few times Shanea had to tell me to shorten my inside  (left) rein. I have to appreciate the irony of that because for a long time she was telling me to let go of it.

So that's progress. Sort of. I guess. Right?

From there we went on to practice some lengthens. This is the first time I've been able to work on them in months and I was excited. They were nothing to write home about in terms of actual dressage lengthens. But she was really trying and stayed pretty relaxed over her topline so I was over the moon. The stretch will come out of that. In the past she would tighten and then fling her legs, speed up and then dump on the forehand. I need to sit up and keep my shoulders up to help her and also not stiffen.

Despite these not being anything too spectacular, working on this really helped her get her trot refined


When she gave me a really good try with the lengthen I brought her back to a walk and gave her lots of praise. Shanea got after me, not for giving her a reward, but for the horrible transition. We did a couple more and then there was this really nice one and on that we gave her a break to chat about it.

Then Shanea said that we were going to do a few minutes of canter. Normally I would have stopped there but it seemed to me that Carmen would be okay with going back to work and asking for just a bit more. Turns out I was right.

Our canter to the left was way better. I managed to get a screen shot of the moment of transition:


It was a way better transition then the photo above indicates:

To the right was stiffer and had less flow. That is not unusual for us. But in the end it came nice and through. And then we stopped.

I loved this lesson. The sun was shining, there were no bugs and the air was fresh. I loved being able to work on actual dressage stuff. And best of all I loved that through the whole ride Carmen and were having a conversation. No one lost their marbles. No one got cranky. We just worked together towards a common goal. 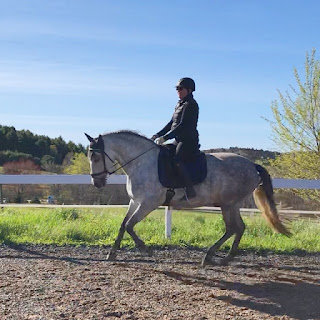 And I've worked very hard to get here.
Posted by TeresaA at 8:28 PM