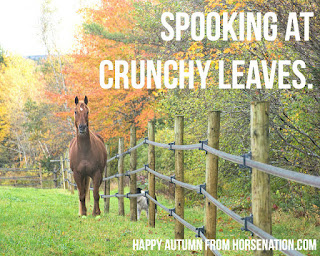 This was shared on my wall by a friend on FB. It seems that my photo of Irish and d'Arcy is a meme. Which is pretty cool.

Things have been interesting with Carmen. Every day I see a huge improvement in her attitude and demeanour. And I don't think it's the training (although that is helping).

I think it's the gut medication.

When I think back, the wheels started to come off in early August after we had been at two shows back to back. I think that she has acidosis or ulcers. The medication I have her on is more for symptoms, not for healing so I will call my vet on Monday. I think she will need a round of ulcer meds and then will need them in the summer. In terms of her management I don't know what else I could do in terms of that to help her.  Maybe I'll save that for another post.

I feel guilty about 'blaming' Carmen when I realize that she was trying to show that she was uncomfortable. But she's not always easy to read and guilt is a non-productive emotion so I will try to let it pass and focus on the lesson.

Anyway, I had made arrangements with Tanya and Nancy to go on a trail ride at Coveside. You may recall that I went there last year and had a blast. Now given that last week Carmen was basically unrideable this may seem like a bad idea. But Carmen is generally better on the trail and around other horses and I wanted to add in some fun. Because lately life has not been fun for or with her.

On Friday night I was sneezing a lot but didn't think anything about it. Saturday morning though I woke up with a searing headache, sore throat and achy body.

I made sure that I rested as much as possible on Saturday- other than taking care of the horses, dogs and doing laundry I rested. Ed was pretty sure I was going to cancel but I was determined to go. I hooked up the trailer Saturday evening and crossed all my fingers when I went to bed.

Sunday I did not feel good at all. But I could walk and decided that I was going anyway. Ed said nothing but clearly had opinions on this. But who knows when this opportunity was going to come again? So medicated, loaded my pockets with kleenex and put Carmen on the trailer.

I met up with Tanya and another young girl (Leah) at the stables. We parked and unloaded the horses. Carmen stood there looking around but didn't move her feet. We put the horses in stalls and then headed back down and got our tack.

When I mounted Carmen in the arena she immediately tensed and felt defensive. I walked her in a few circles while the others mounted (the young'un got on from the ground).  We walked out and headed for the trails. Tanya's young mare was quite excited to be on this outing and pranced around looking adorable.
Suzi 'oh this is so fun, where are we going? What's that over there? Wheee'

As we walked out Carmen became more and more relaxed. Honestly you guys, she was incredible. We walked most of it on a loose rein. Not at the beginning- there were some granite rocks that she was highly suspicious of. 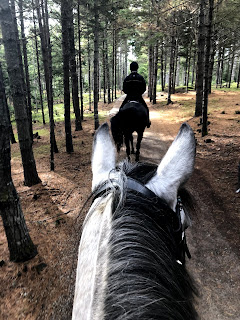 As we headed into the woods she let out a big sigh and her ears got floppy. I was able to let her walk out on a long rein.

I occasionally had to take back the reins- she was striding out so well she wanted to pass the leader. And over bridges- just to make sure that I had her between leg and hand. But she walked over them with total aplomb. Which was great for Suzi because it helped her to just follow us over.

There was a lot of hills which was great for working her back and hind end. At one point we were below a public trail and a bike went by. Carmen looked at it Oh hey, a bike and then carried on. The things she did look at were cautionary and not near death experiences. Between being ill and the medication I was unable to be tense which likely helped a lot.

I don't know how long we were gone. An hour maybe? When we got back to the barn all of us were very happy. The weather was cool but the colours were lovely.

When I got home I realized that I was going to pay for this morning. I am now feeling even worse and my body seems rather pissed at me.

My soul is happy.