Or I am still mulling.

We are getting hammered with another winter storm. For us it is all rain- no snow. Which is actually more difficult as the ground is frozen and not able to absorb it. I had to make sure that it had a path to flow so that the barn won't flood. I was probably worrying unnecessarily but hey, that's me and I need to go with my strengths. If it makes me feel better to be out in high winds and driving rain sticking a shovel into frozen ground to make the drainage pathways larger who is going to argue?

As long as I'm not late with dinner.

Hiding inside from the weather gives me time to write an update on the red headed wonder: Irish.

Back in August I wrote a post about Irish and his incontinence. I purchased the boots and they worked really well to protect his legs from the scalding. His legs healed nicely and he was feeling perkier. But (why is there always a but?) wearing them 20 hours out of 24 was not good for his legs. He started getting some rubs from the boots. They also became very foul smelling (logical I know) no matter how often I washed them. So I went and purchased the Keratix Mud Shield powder. Now I do a boots every now and then and use the powder a lot. His legs look gross but it actually just rinses right off (unlike before).

Kris at Dancing Donkey suggested that some diet changes might help. She and I exchanged some emails and she suggested lots of things, the key being amino acids. These might be lacking in his diet. I am very careful with Irish's diet - given his history of ulcers and colics I don't make changes lightly. I did a lot of my own research. One issue is that getting supplements here in Canada is difficult , especially if you want a reasonable price.

Fast forward a bit and Cathryn at Two and a Half Horses did a post about her vet recommending Myoplast to help build Annie's topline. Reading that post and all the comments led me back to exploring some options for Irish. I then found a reasonably priced source for pure lysine in Canada (apple saddlery). I purchased it and have had him on it since November 8, 2017. I took some photos to document his progress. 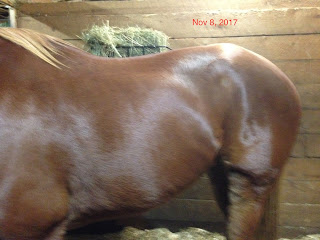 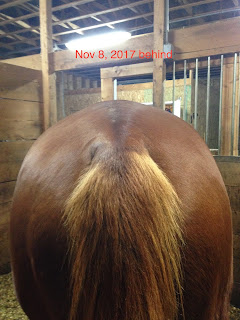 Within a week I noticed something pretty amazing. Irish has always been a 'fussy' eater. In the winter he gets a lot of oats, fat and fibre,  free choice hay, soaked beet pulp and  alfalfa. Essentially he had food available 24/7. Rarely did he ever complete his grain/pellet ration. Nine out of ten mornings I threw out left over feed/beet pulp/alfalfa.

Now he finishes everything and is impatient for his breakfast and supper rations.

Guys this is huge. Irish never finishes his feed or hay.

Another thing I noticed (although not as quickly) was that his incontinence significantly reduced. It's not gone but it's so much less. I also think I see a difference in his topline- even though he's not getting exercised.

This week I checked him again. He hadn't gained any more weight which I found disappointing until I realized that this is the first time he didn't drop weight when the temperatures plummeted. He's maintaining his weight at 1098 (according to my weight tape). 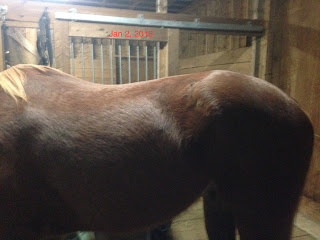 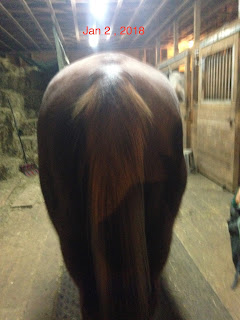 I don't know if the photos show anything at all. His topline looks better to me but I also want to see it. A few weeks ago when Shanea visited and Ashley was riding she commented that he looked good compared to the last time she saw him.

I have no idea what the scientific explanation is. My theory is that he was unable to extract the nutrients he needed so wasn't interested in eating. The lysine is helping him to do that. I cannot see it as a coincidence that after 6 years at home he suddenly decides to start eating (and longer than that but he was boarded so I can't swear to it).

Letting him build up weight and topline should make it far easier for him to be worked too.