I was unable to ride again this weekend. Yesterday was torrential rain, but I am grateful that it was not snow. The thaw took the frost out of the ground so the rain could be absorbed somewhat. I could have ridden today but I had so many chores to do that I ended up doing those first. Normally I will ride first and then do chores but I am okay with not riding today. January is rarely a time where I make great strides in training. But now my barn looks much better with all the old hay cleaned up.

My son is away for work and so we have his dog until the middle of March. I was a bit worried about it driving us crazy like it did last time but it's going really well. Being a year old makes a huge difference.

She and Guinness are great friends. I am getting lots of walking in.

One of my battles this year is keeping Carmen from her life goal of turning into a marshmallow. When she first arrived she was a bit skinny and (probably) ulcery. That is gone and she's maturing into a solid horse. Which is fine when she's in work. She does not appear to have any desire to run around the field and exercise herself. So, in addition to the slow feeder, I have taken to putting loose hay out in various parts of the field to get her to walk around. However, at night in the stall she is literally gobbling her hay. After much deliberation I decided to try one of the Tough 1 hay hoops: 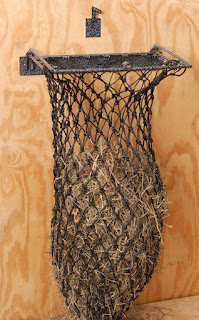 I figure that at least it will make her hay last longer. I put it up yesterday and loaded it. As you can see by her expression she is not impressed with this development. 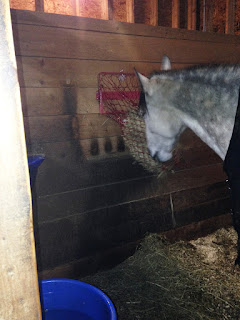 Her position is that if she's going through her hay too fast that is evidence that I need to give her more hay. Simple equine logic. That evening as I filling her bucket she tipped over my bucket. Something she's never done but her look spoke volumes. Oh well.

Despite the mild weather, Martin refuses to go outside for very long. 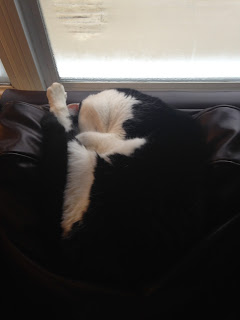 I don't know what happens when we die but I'm pretty sure that Martin is going to become one with my sofa.
Posted by TeresaA at 7:23 PM