My friend Cindy posted this cartoon to her FB page and it made me laugh. It reminded me of a certain mare who, while not as 'fluffy' as this one, shares this sentiment. 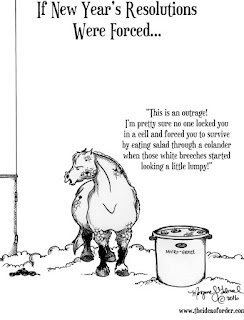 After writing my last post I realized that I really need to get a handle on my self-judgement.

You see I've been feeling a bit guilty about not riding lately. Which is rediculous- the footing and the weather have made it impossible. But I have that voice in my head that says 'if you really wanted to ride you would find a way. You are being a chicken".  I really don't like that voice.  So one of my goals this year is to try to get that voice to shush.

Anyway, today the weather was warmer and the snow was soft so decided to ride.  Carmen seemed to be quite happy to be brought out and tacked up. The girth is on the same holes as this summer so that is good. I put her on the lunge line to evaluate her mood and the depth of the snow. It seemed to be really good except for one end which was a bit deep.

I hopped on and we went to ride. I am continuing to work on the goals of keeping her on my aids (which means I have to be making sure I'm directing her), not adding to the tension and not hang on to the rein too tight.

The interesting thing about riding in the snow is how it encourages the horse to really step up. On the lunge Carmen was really pushing. How that feels in the saddle is incredible. I realized that I have more fitness to develop in order to sit that. Initially she was a bit tight and looky but as we walked she became more relaxed and listening. There was a lot of power in her trot and it caught me off guard at first. My first thought was 'wow'. My second was 'oh my core'.

She started to blow out and I could feel wanting to GO. Like really go. I didn't let her - maybe I was chicken but I didn't want her slipping in the snow and injuring herself. So instead I said 'let's work on control and power. Speed can come later'.  I was really impressed with our work to the right- there wasn't any hesitation in picking up the trot like there used to be when we started back to work. We finished with a lovely canter in the snow. Again there was real power. Carmen wasn't even breathing hard.

Back in the barn Irish was feeling a bit sassy. I looked at him and thought hmmm. I got out his tack and saddled him up. Carmen was funny- she was outside eating and then she realized what I was doing and started to freak out a bit. I mean I don't ride Irish. I ride her. But Cynthia is gone and Irish needs work so up to the ring we went.


Irish was a bit excited. I didn't want to put too much a strain on him with the snow. When I asked him to trot he gave a squeal and hop. Young Irish would have been a handful. Old Irish though can't do too much so I laughed and then he became insulted and finally we settled. He also wanted to GO and I let him pick up a canter. A couple circles took the wind out of his sails and we could do some work. I noticed that between E and C he was counterbent and looking out. I realized that this was what Carmen was doing too.

Two very different horses, same issue. I wondered if there was a common denominator......

Yeah. Me. I realized that I was clamping with my left hand and thigh. So I fixed my position and surprise, surprise he became straight. This is a good thing about riding different horses. While I was riding Carmen just ate her hay- so obviously she wasn't too stressed.


I really want to have a lesson (or two) but I need things to thaw. Come on spring.