Hark, now hear the sailors cry
Smell the sea and feel the sky
Let your soul and spirit fly into the mystic
~Van Morrison~

I didn't really have explicit goals for the weekend. I just had a 'sort of' plan. I think that that was a good idea because it allowed me to enjoy the time and not get caught up in whether I was meeting any specific goal.

I am sure that you are all shocked that I could be super-obsessive about goals and achieving them; but I have been known to be a bit intense. 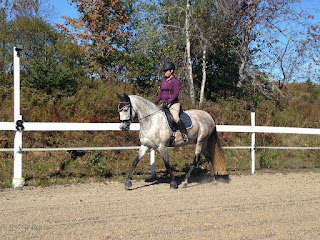 What I did want to do was to break our pattern of tension when I'm riding. It's become so that I can predict when Carmen will start to spook or act up. So instead of a goal of a calm ride, I decided that I would just ride and school.

Sure enough, when I first mounted I felt her tense up. As we approached the far left corner (the one she spooks as in every ring), I felt her tense up. I flatly refused to copy her. I left my legs dangling and ignored all the scary things she wanted to notice (like the diffirent coloured dirt, patches of sun, crack in the door). Instead I just rode like it was all fine. 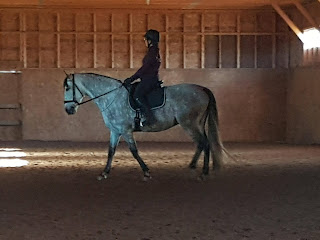 And so it was all fine. Our rides were nice and productive. I worked on what she was doing in the moment. I spent a lot of time getting her to stretch into the bit. And on Sunday was able to get some pretty consistent transitions without her stiffening her lower neck and hollowing.

I also discovered that her canter has become strong and powerful. Nothing like riding in a 20 x 40 arena to realize how quickly a corner can come up!

Karen rode her for a bit on Saturday. It was great to watch them work together. Carmen started off as 'I just can't do shoulder in, it's impossible and you are mean for asking me to' to 'oooh I can do it!'. When I hopped on after to cool her out she was so soft and relaxed over her back. It was lovely.

It was wonderful to spend three days riding and working on things without pressure or an agenda. I could do a little leg yields, then switch up to something else.

On Saturday Karen, Janet and I went out for lunch and then to Bits N Bridles tack shop. Where I found a very special saddle pad:
While some individuals may think that I have a saddle pad problem I know that it's perfectly normal to have about 15 pads. After all I have 2 horses so it's really just 7.5 each. Right?

Anyway, I have had my eye on the Baroque saddle pads for a while. Last year I had decided that if I had a good year of showing with Carmen I would buy one. Of course by the end of the year I hadn't gone to one show.

All for very good reasons and I have no regrets. It was time (and money) well spent. But I had a plan and so while I could have bought the saddle pad I decided not to. You may think I'm silly and that's okay. It made sense to me.

However, this year has been a huge success for us. I know that Bits carried these and I was not disappointed. I fell in love the blue and black one. I am impressed by the quality of them as well (fashionhorse.com). 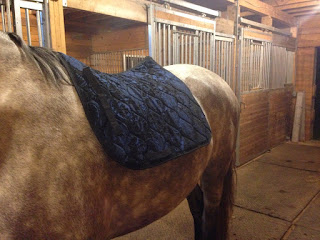 As you can see it looks perfect on her. I rode in it on Sunday and she was so good. I'm sure that would be lots to fix if I was getting a lesson but she was trying hard to figure out what I was asking and I was trying hard to give her what she needed.

Obviously it's the magical saddle pad.

It really was a perfect weekend. There was so much laughter and sharing the joy that horses bring us that completely recharged my batteries. Riding is becoming fun again. And not just every now and then but all the time. Having another eye watch us go and give some advice was wonderful. Watching others ride was fun.

I even got to ride Karen's stallion. He's amazing and so powerful- I call him a Ferrari! I had him cantering and I couldn't figure out how to get him stopped (I didn't want to haul on the rein, he's trained to respond to the seat) but I never felt in danger. Just like, uh oh, where's the brake pedal?

I am sure that Carmen felt the vibe as well. She was so calm and relaxed through it all. I had to laugh because on Friday she nickered to Kalimo (Karen's stallion) and raised her tail (I realized she must have been in heat!) but on Sunday she pinned her ears at him and her tail was firmly clamped. He didn't seem to notice either way.

The mare who walked off the trailer calmly and meandered out to her field later on sunday is miles different from the mare I had last year or even this spring. She has a confidence now that wasn't there before. And maybe I do too.

I definitely want to have a few more of these weekends over the winter: horses, friends, food and shopping. How could it be better?!
Posted by TeresaA at 1:48 PM