Let me start by saying that I have the best husband. He has embraced country life with enthusiasm. Which is great because there are often puzzles to solve when owning a farm.

One such puzzle involves feeding hay. I hate feeding hay on the ground. Horses make a big mess of it and then won't eat it. It's wasteful and difficult to clean up.

Enter the hay box:
That worked okay but they pulled the hay out and made a mess. Then when we got a lot of snow it would be buried. That caused some concern with me that a horse might get injured. After the winter of 2015 we ditched it and started again.

The next attempt was the slow feed hay net suspended between two posts: 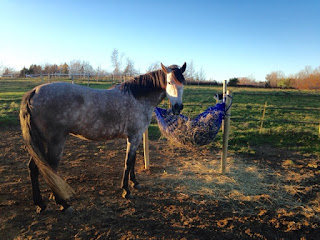 That saved a ton on hay wastage and made clean up easy. That worked great for the winter and then in the spring the horses broke one of the posts which led to safety issues. Then they did it again the next spring.

Back to the drawing board. Obviously more study was required. One day this summer I walked into the garage to see Ed building something.
What are you making?
This is a garden box for Andy's wife. She wanted one and I said I could build it.
Hmm.
I circled around it with my mind whirling. I realized that with some modifications this could be the answer I was looking for.

We talked about it and Ed came up with this: 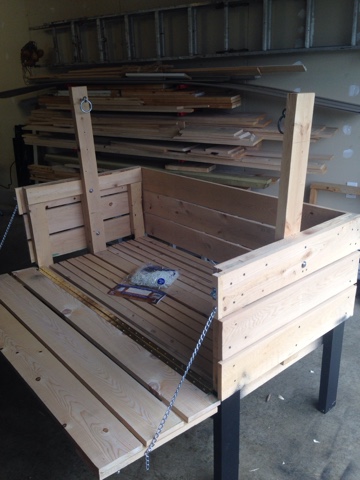 It's an elevated hay box. It's large enough to fit a full bale (or more). The hinge makes it easy to lift the hay in. The legs are black because they are painted with some stuff that rubberizes them to keep them from rotting. The whole thing is made out of hemlock which is a great wood for outside. But the  hay doesn't sit there waiting for the horses to drag it out and make a mess. We purchased a slow feed hay net that is suspended between the two arms.

I'm really really hoping that this will work for us. I may have to put some metal around the edges if they start chewing on it but I'm hoping that they won't.

I told Ed that he could sell these if he wanted. I think he was intrigued with that idea. I will be his agent of course.

SaveSave
Posted by TeresaA at 7:16 PM