****
Standard disclaimer that all errors are mine and should not reflect Jacquie's training
****
Overnight the temperature dropped from 'unseasonably warm' to 'cold and blustery'.  I was glad that I had thought to throw a winter coat into the truck before I left. At 6:30 a.m. it was cold! I fed the horses I was resonsible for (there was a new one looking at me plaintively but I explained that I didn't have instructions and could not help. Talk about guilt!) and headed back to the house for a warm cup of coffee.

Once it was light out I turned out Carmen and hooked up the trailer. I liked being able to turn her out. I think that it's better for a horse to be able to move themselves when possible. Carmen is not that good at being in a new turnout amd I am hoping that she gets used to it.
She was calmer this time but still happy to come back inside. I watched a few rides and took more notes. Jacquie had spent a lot of time in the clinic talking about balance. She talked a lot about building the bridge which holds the rider. The two sides are the front end and the back end. If you push too much and/or too quickly the back end can push the horse onto the forehand and they lose their balance. My understanding is that she believes that the front end needs to be warmed up and loose before you ask for too much behind. She also made the observation that horses get upset at a lack of balance and can be reactive. It sounded very similar to something that Sue leffler (CR coach) said to me as well.  Jacquie said that a horse and rider are like pairs figureskaters. The horse is the man on the bottom holding the woman over his head. If she is moving all around he cannot stay balanced underneath of her and there is no security. I liked that image. 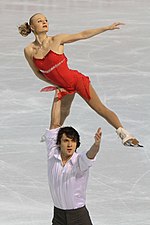 I braided Carmen again. I hadn't planned on putting on her ear bonnet but I made such a mess of the forelock that I figured it would cover it up. From the side she looked like she had a small horn growing out of her forehead.

I didn't bother about taking her to the outdoor to warm up first. Jacquie said that she preferred we didn't anyway. I simply came in and mounted up. I felt so much more relaxed then the day before which allowed me to be more focussed.

Carmen pretty much felt the same as the day before and  gave a spook as I walked off but honestly I was just her typical spin away and it was no big deal. Jacquie pointed out the value of the neck strap for a spooky/bolty horse. She explained that I could use the strap for control and not have to hold so much with the reins. This allowed me to push her forward into contact withtou worry about where she would go.

In my ride the night before I had realized how much easier it was to keep her straight. When Carmen gets tense and ready to run away she always drops the inside shoulder. I can use rein to flex her (or actually bring her head right around) but then she drops her outside shoulder and twist her neck and by then I've lost whatever the heck it was I was trying to work on. With the neck strap, when she dropped her shoulder to the right I would pick it up on the left and give a small tug. This got her to pick herself up at the shoulder/wither  and rebalance. This kept us straight and on track. Essentially the rope helped me to steer her shoulders and keep her underneath of me.

The other way we used the neck strap was to lift it up gently when she dropped her neck/chest and wanted to plow down. I could feel her lifting her shoulders, my leg brought the hind leg under and she lifted herself into self-carriage. It was so cool. I have no idea if the videos captured how it felt but it felt awesome.


Carmen and I relaxed much more quickly into work on Day 2 and we could focus on some more things- like straightness, shoulder fore, and canter. With the canter work, Jacquie really wanted the trot to slow up and the horse reach under and then ask. It felt quite exaggerated and I'm sure the idea is with time for that to become and invisible half-halt. Doing it that way really helped Carmen to step into her right lead canter (her 'bad' way) with little difficulty (at around the 1:50 mark):

I just loved how quiet and calm our canter was. It took a lot of repititions but me to understand about the slowing up first. Jacquie kept saying 'tell her 'whoa'and  I kept saying 'easy'. I think she was getting a little frustrated as to why I would not say 'whoa' like she was telling me. What I wanted to say but it wasn't the time was I have spent a lot of time, money and effort on teaching this horse that 'whoa' has only one meaning : all four legs come to a complete and total stop no matter what gait. It's our 'safe' word. For Carmen 'easy' means 'slow up and come back to me'. That seemed like a lot to try to explain and Jacquie let it go so it was okay. I knew that adding in 'whoa' would only result in confusion. Lots of people who ride english use 'whoa' to mean everything from stop to slow up a bit. I get it and I have no issue with it. But for me I like having 'whoa' mean just one thing and I'm not going to change it at this point.

Some more rigt lead canter:
At the 10 second mark she lifts up into a lovely relaxed canter. I think it was the best trot-canter transition I have ever done with her.  Amd we were straight down the long side- no haunches in!  I loved everything about the ride: how she was listening and we were able to work together.

We finished up practicing walk/canter transitions. I was making the mistake of asking her to canter and throwing the reins away. I was to let her take the reins forward and keep the contact. Once I did that we were able to get some lovely transitions. Of course my phone died before then so you will just have to believe me.

This clinic was a fabulous experience for me. I would do it again in a heartbeat (I would have to save up first). I learned a ton and came away with some new tools and a deeper undestanding of what I need to do. I allowed myself to be pushed and it really paid off. Carmen and I, like every other horse/rider in the clinic finished our lessons having worked hard but we were not exchausted or sour. Carmen was quite pleased with herself and you can see in her demeanour that she was happy.

It was lovely to get away and spend some time in a bubble out of the larger world. I didn't hear any news and it was wonderful. Instead it was a weekend where I spent some time with some lovely horse women and my lovely girl. We had fun and learned a ton.
Posted by TeresaA at 2:43 PM