I have already written about Friday's ride in which Carmen was a bit up but totally listening.  On Saturday she was bit more up but still responded really well. I honestly thought that I might get a big spook or two but it didn't happen.

On Sunday I had a lesson booked for late afternoon. As always, I was excited to continue our work. I had Carmen ready and up in the ring ahead of time so I could warm up before Shanea arrived. Up in troll corner Carmen began to have a melt down.
Camren: OH MY GOD OH MY GOD OH MY GOD. MONSTER!!!

I looked over and I realied that she was looking at the trap we had in the empy paddock. Now let me back track a bit and explain that after FOUR (count 'em- FOUR)  run-ins with the porcupine Guinness has not seemed to learn his lesson. So Ed hired a guy to bring out a humane trap to catch and relocate the porcupine. It might not be fair because it's Guinness' fault but he's strong enough to break away on the leash if you are not expecting it and, often I let the leash drag. I could see that the trap had been sprung since I had checked it in the morning. Inside was Chester (my cat) and he was not looking so impressed. I thought that I could carry on and get Shanea to let him out. I was quite happy with how I was riding through her antics. She was not impressed and thought I was crazy but there was no big bolt or spook on her end  and no grabbing on mine. But then Shanea texted that she was running late and I started to feel guilty.

I dismounted and Carmen and I walked out of the ring, into the paddock and up to the trap. She was hesitant but followed. I let Chester out and he took off with an accusatory meow. Carmen then proceeded to check out the trap.
Hey, did you know that there are apples in this?
Why yes, as a matter of fact.
How do we get them out?
We don't. They are for someone else.

We walked back to the ring and back to work. She wasn't super impressed with that idea but settled in soon enough.

Shanea arrived shortly after and we talked about my goals. I said that I really want to work on lengthens. I'd been playing with them but wanted some help. The first step was to get Carmen marching forward in the walk. She was nice and forward and reaching for the bit. Her back was soft and swinginging and it felt great.

And then the trot. I had put down my crop but had to pick it up becasue she was not interested in trotting right now, thankyouverymuch.  It didn't feel like she was tired or sore, just that she was not really sure that she should go forward. So I picked up the crop, asked her to go forward and then gave her a tap behind my leg. She kicked at the whip and then went forward. Going to the right, Carmen tends to lean her weight to the inside and you feel like you are always pushing her over to the outside. The crop behind my leg really helped with that. After a few times of her getting irritated with it she began to realize that it was just an aid, like every other aid. And then she started to relax and listen to the inside leg to outside hand and the crop was just there to refine.

I have to say that I had some of the best trot work I've ever had with her. As I got her onto the outside rein and going around the circle I could really feel the push from the hind leg into the bridle. At times she would get heavy or behind the bit but that was just her trying to figure it out. We both could feel how much easier everything was and the spooky corner just disappeared. Not that she wasn't aware of it- she totally was but by riding her forward into the hand and not stiffening it became not important. 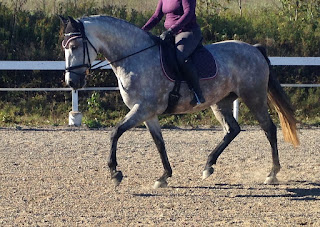 We did some work at the canter as well. Going to the left was much better but it's all about the straightness. So to the left it's pretty easy to keep her straight and when her haunches do come in, it's easy to get her out. To the right is much harder. I had to feel like I was almost counter-flexing her to get her straight and aligned. She wasn't counter-flexed, but we've both gotten used to the feel of her being over bent that it felt weird. She was not so sure she liked it at first but then we could both feel how much better it was. Certtainly, our trot-canter transitions have improved a ton. I have to remember to not take back when she curls but to push her forward and let her take the bit. Not so easy when you have a horse that was a bolter and much harder to the right. Even she got a bit confused 'what are you doing? You're supposed to hold me in!'  But it was so much better as we progressed.


Finally we began to work on some baby lenghens. At first just around the outside and really it was just a tiny amount- looking for her to stretch out her frame. We then went across the diaganol: balance and shorten through the corner and ask her to go out.   The first time she was crooked and nothing happened. The second time I over did it and she broke to canter. Which is no big deal and I just rode it for a few strides through the turn and then brought her back. However, she began to think that that was the idea and got angy when I said no. Carmen likes to know the answer and gets upset if she doesn't understand the question.

So I brought her back, regrouped and made sure I had her straight out of the corner and simply gave some rein to move into and put on my leg lightly. And by heavens she lengthened out her frame and pushed from behind. It was awesome. She could only hold it for a few strides but that's okay- that's a strength thing and can be worked on. 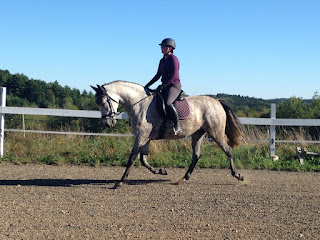 We were both very tired by the end and I don't know about Carmen but I was so happy. We had some great work and moved closer to being able to show First Level next year. There was a time that the whole cat-in-a-trap thing would  have made her impossible to deal with. But not now. Now it's just a blip.

I felt like I rode better-more in control of my core and hands. A few times I caught my rogue left hand trying to cross the whithers but at least I'm starting to notice it. Carmen wasn't perfect- she really wanted to dive towards Shanea and get some love. She also expects that if we stop at the gate I'm going to open it and leave so I have to work on that. Even though I never open it and leave. Mares. 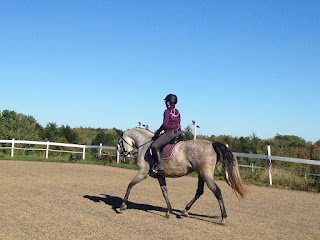 If I can hold it together with my position I know that First Level is well within our grasp. I'm wondering if I can access an indoor for this winter to keep us going.
Posted by TeresaA at 2:13 PM