Yes I know.
Like, who books a lesson on Friday the 13th? 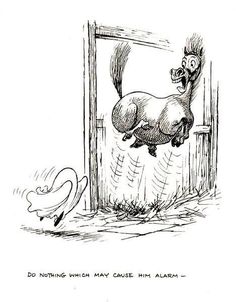 Turns out that I would. I never even thought about the date- I was only concerned about the weather and it was going to be beautiful. The night before I had thought that I would ride but I was too tired. Instead I decided to do some ground work. I took her out of her stall and right up to the ring.

But she was off. Just a wee bit, but still not right.

I checked her over and then noticed her right foot. I picked it up and saw that her shoe was twisted and partially off. She must have caught it fooling around in the pasture.

I called my farrier but I wasn't holding a lot of hope since he lives far away. He told me to remove it but I wasn't comfortable with that. But I remembered a friend who does his own horses and sent out a plea. He came the next morning to remove, straighten and reset the shoe.  I am eternally grateful to him for doing that. (note to self- see if you can learn how to do this). Even better was that Carmen did not seem the worse for having a twisted shoe.

I get on Carmen about 15-20 minutes before Shanea arrives to do a warm up. Carmen was a bit spooky at the far end of the ring (down by K). Little sparrows were flying around feasting on late fall berries.

I was doing a walk leg yield when Carmen spied Shanea walking up the hill towards us. She suddenly wheeled to the left and tried to leave. I have figured out that to deal with this I need to bring her around but opposite to the way that she tried to leave.

Other then that our lesson went really really well. The goal was to get her forward and relaxed through her back so that we could get her working from behind. Not that those are completely discreet things- they are very inter related.

Shanea complimented me on my inside hand- it no longer crosses over the whither when she's tight or trying to bulge in. I thanked her and told that it still took a lot of conscious effort to not do that. Unfortunately my inside hand is still rogue in the canter- it wants to take too strong a contact. It will also do that at the trot but I'm really struggling with it at the canter.  I believe that it's a hold over from when she would gawk to the outside and then bolt. It was to try to keep her from looking out.  Which is not a bad thing but it's adding to her being crooked and not helpful.

We did a lot of work on the canter getting it forward and straight. Carmen wanted to fall to the inside down the side by the trees so Shanea had me turn her down the quarter line and leg yield her over to the rail to keep her straight. Which is why my leg was back in this photo below. Probably too far back but look at her stepping through:


The canter is our homework to work on being straight.

We also did some work on the stretchy trot. Getting Carmen to stretch over the back without falling on her forehand or jerking the rein from me is not easy. My task was to not let her go too far- just enough to keep her balance. It really forced me to use my seat to keep her balanced and not let her get fast. We had some really nice stretches, as well as some crappy ones. But it seemed that we were starting to figure it out.

Our trot work felt really really good over all. Shanea has me riding her forward into contact and this helps me to not pull to get the contact. The more she seems to suck back the more I urge her forward and give her a place to go. That positive ride gets her mind on me and not on whatever she's worried about. 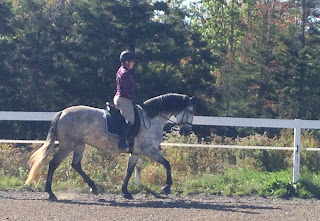 We finished by playing with some trot lengthens. Because of my rogue inside hand I was interfering with the flow and giving her a head tilt. But still she tried. 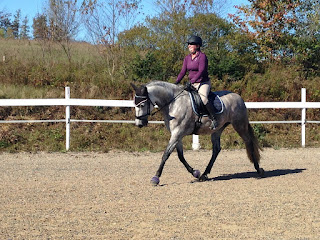 We did have a couple really good lengthens (for her level of training) where she coiled up with her hind quarters and then stretched out and really elongated her frame.

It was a great lesson. As I was cooling out Shanea said 'I wish you should see your smile right now'.
I love the trajectory we're on right now. It's so much fun.