Irish has had very little riding this spring/summer. Mostly because he's been unsound (those dang feet). But it's have a negative impact on his muscle and topline. Not that I expect him to look how he did 'back in the day' but I know that horses need to keep moving to keep going.

Last Saturday I had just finished a good ride on Carmen and was back in the barn. Irish was looking at me with a grumpy face. He's been a bit cranky lately. So I decided to take him out for a short hack. I figured I nice little spin in the woods might help him to feel less restless and grumpy.

I also felt that it would be good for Carmen to be the horse left, rather then the horse leaving. She was less than enthused about that idea but I was impressed. Other then a few forlorn whinnies she didn't have a total melt down.

I tacked Irish up and hopped on him right outside the barn. He was on high alert and do his best Llama impression as we walked up the hill. To be honest I'm more worried about his tripping then doing anything to unseat me so I let him have some rein as we marched up. As we headed around the outside of the ring he stopped dead. Guinness had left his favourite toy there on our morning walk (he likes to take it with us but sometimes gets distracted).
Irish took one look at that red thing laying in the grass and decided that it clearly dangerous and did a spin-bolt. Except that it's Irish and he's older and unfit and not that coordinated so it was the slowest spin-bolt in history. Kinda like a person sprinting with a walker. I was laughing so hard as I brought him around again. When Irish was younger the technique I used to get him past spooky things was to  walk him towards it and halt before he was going to stop. And then ask him to go forward, then stop until we were by it. As soon as I did it the first time he totally knew what I was doing and marched right by the ball (although he gave it the stink eye).

We headed into the woods and played on the new trails. It took a while for him to relax.
There was a big rock on one of the trails that caused some snorting (even though he has been by it a dozen times before). But it felt good to get him out and moving and as we walked he began to enjoy it a bit.

We finished up back at the barn and I turned him back out to enjoy the grass. I might be biased but I think he looked much less grumpy then when we started.

And one more photo of Guinness- he's turning into a very handsome dog. 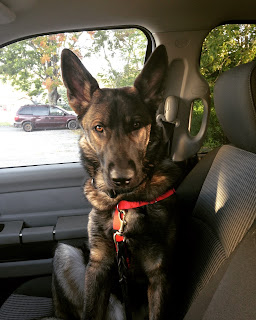