The Fragility of Confidence

I need to tell you guys about my ride on Sunday so that this post makes sense. I got Carmen ready like I always do. I started her off at the walk and she immediately wanted to head across the ring towards Troll Corner. I decided to let her do that and then we walked down to the far end of the ring. All of a sudden we were in full flight back up to the top of the ring. I could not get her stopped so I turned her in a  circle and kept her there until I could gain control of the canter and then we cantered some more.

That was the start of what was an awful ride. It was like my rides from last year. I could not get her down to the far end of the ring without bolting. In the end I worked her butt up in the far end and then took her tack off and brought her back to the ring to do some ground  work. It took about 15 minutes to get her to listen to me. She even thought about running me over at one point. I got her back to being settled and calm and put her away.

Now a sensible person would realize that bad rides were going to happen and that this was a glitch. But of course of this is me and my confidence was shaken by it and my inner demons were saying things like:
You thought you had worked through this but you were obviously wrong. Of course you don't know what you're doing. You have been putting too much pressure on her. You've been letting her get away with things and not asking enough.....blah blah blah.

The truth is that I don't know what set her off. It could have been the final hurrah of her heat cycle, it could be she saw a deer in the neighbour's field or a rabbit in the brush. For whatever reason the hamster fell of the wheel and she was a basket case. That evening she was more like herself- calm and affectionate.

I was surprised by how shaken my confidence was. I wasn't afraid exactly, although there was one moment when I thought that we were going to wreck on some poles. I was more worried our gains were more shallow than I thought and couldn't withstand a 'real' test. Even given our successes this year.

I was not sure about going to Rachael's the next day but I did it. I rode defensively there- I know I did but Rachael was helpful and in the end I was really glad I went.

Wednesday I had a lesson with Shanea. I spent time with Carmen in the barn getting her ready and then was on her walking around a good 20 minutes before our scheduled lesson. I brought up my lunge line just in case. She was a bit spooky at the far end but I tried Rachael's technique (I will do a post about that soon) and it worked well.

When Shanea came I gave her an update. I need to be honest with her if she's going to help us improve. I also have trust that she won't leap to all sorts of judgements about what happened (I can do that to myself, thankyouverymuch). Instead she listened carefully and then we went to work.

And it was an amazing lesson. Carmen was with me the whole time, listening and trying. Shanea walked me through how to set up Carmen to listen and not wait until she stiffens or gets spooky. Essentially it was to ask her to bend to the inside and once she softens give and ride her forward. That really helped a lot to prevent her from getting off the aids. It was nice because at no point was I 'pulling' but I was gently insistent that she bend and soften around my inside leg and then use the outside rein to get her through.

As an adult amateur I don't have the advantage of riding multiple horses or the educational background to have the confidence of my plan. Horses are thinking, living creatures and much more sensitive to the world around them then humans. It's easy to read a blog or forum post and know what that person should have done. But in the moment it's hard and mistakes will get made. And sometimes I am doing the right thing but it feels like it could be wrong because the reaction is not what I expected. Then the question of whether to stick it through because it will work or try something else. I think that this is why so many amateurs end up doing so many different techniques and confusing their horses.

This is why when I hired Royce I stuck to his program. He didn't need me dismantling what he had accomplished in between our sessions.

This is why I am so happy to have Shanea come regularly to help us and keep us on track. I realize that my self-confidence with Carmen is not as deep as I would like. I also know that I have a tendency to believe that progress should be linear even though I have lots of empirical evidence that this is not the case. 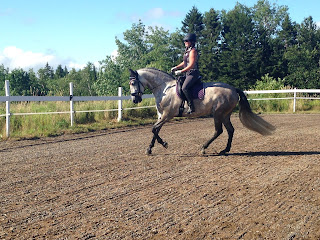 Even more importantly, at the end of my lesson I felt my confidence returning. Which is a sign of great coaching- it wasn't about stroking my ego and lying to me. It wasn't about lecturing me on how I should be doing this or that. Instead Shanea helped me to put elements together and talked me through it. In our lesson we practiced elements of T3 and we did very well. Shanea declared us ready for our next show on August 5-6. We're going to do T2 and 3.

I love riding this mare and I am not giving up.

SaveSave
Posted by TeresaA at 7:31 AM