I've been wanting to get my saddle checked for a little bit. Carmen has been fine but I could feel my position shifting and becoming more difficult to keep in line. I know that something about the way that Carmen and I work together results in the stuffing getting compressed on the right side.

I finally made arrangements to take Carmen to Rachael's for a fitting. Rachael is not just a Master Saddler,  great horse trainer and teacher, she's also become my friend.

I got the trailer ready in the morning while the horse's watched me suspiciously.

Carmen loaded easily and we hit the road. This would be my first time trailering for about 2 hours each way for a day trip. The ride was uneventful (my favourite kind). We put Carmen in a stall that had 2 small pigs next door. I thought they were adorable but Carmen was less enthused. Rachael brought in her mare, Carpichosa to keep Carmen company. The saddle check took very little time- it was indeed flattened on one side and the fix was easy.

Then we got the horses ready and headed to the ring. Rachael has set up a Working Equitation course, complete with bull. Carmen was a bit spooked by it at first as I walked her by it but she was quite brave and came up to touch it.

Under saddle she was initially uncertain but in the end walked right up and tried to eat the ball.

Rachael was so good in helping Carmen and I deal with everything. She walked me through a despooking technique that was very helpful. I knew the theory but had trouble with the relaxation part. With her help we managed to be successful in playing. Carmen did bolt once- Caprichosa had just galloped over the bridge and the noise startled her just as a person pushing a wheel barrow came up behind her. That was just a bit too much for her. But we settled back down again and all was fine. We walked the bridge and even trotted the 'livestock pen'. I tried the gate and she nailed it the first time: pick up the rope, back through the two standards and put the rope back without letting go. I was impressed with us on that one.

After, we traded horses. Carprichosa had a Dom Vaquero saddle with a sheepskin seat. All I can say is that I want one in the worse way.
I was thrilled when Rachael complemented me on how responsive Carmen was. "You have done a great job with her"  she said. If you knew Rachael you would know that she never gives idle compliments.  Then Rachael dismounted and helped me with her horse to ride the Spanish Walk, Passage and Piaffe. It was my first time every riding those gaits. It was amazing to feel the power and compression of the passage and piaffe. The Spanish Walk made me giggle. Frankly, by then I was giggling like a school girl.

We brought the horses back into the barn and Rachael brought out Elegida for us to go for a hack. Ellie was Steele's dam. She is the grand daughter of Gaucho III and Carmen is his daughter. I was amazed how similar that they look.

It was funny- they took to one another right away. As we walked in the woods Carmen wanted to put her head on Elli's rump. Elli is a very calm horse and exudes the self-confidence that she passed on to her off-spring. 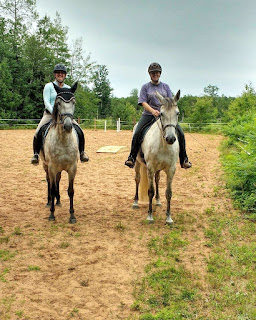 After we had a lunch and a chat and then Carmen and I headed home. Carmen was actually not so sure she wanted to leave but got on on the second try. After her supper she had a nap- I'm sure that the day was tiring for her. I could have used a nap as well. It was an epic, fun day.

It's supposed to rain tomorrow and I am so happy about that. The pastures can use the rain but I think that Carmen and I could use the rest!
Posted by TeresaA at 9:43 PM