Shanea and I booked a lesson for early Sunday morning in order to beat the heat. I had a good feeling about the lesson as soon as I brought Carmen into the barn. She was calm and mellow and seemed in a great mood.

In the ring once I got on we started walking around warming up before Shanea arrived. I found her to be soft and forward. There were no issues in any part of the ring. We worked on bend and leg yields fro about 15 minutes and then Shanea arrived. We discussed the show results and what we've been working on. Then we got to work.

And you guys- I had the best ride on Carmen that I've ever had. She was soft, listening and responsive. With everything we asked she tried her best to figure it out.  We started at the walk working on shoulder fore. Finally I figured out how to keep her straight through the shoulder so that she was really carrying herself. 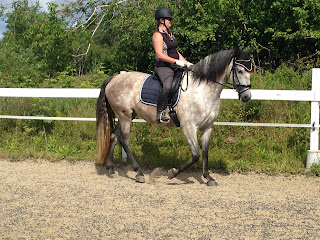 I love everything about this photo- she's soft and listening, her hind leg is stepping through.

We then added in haunches in. After a bit we were doing shoulder in to straight to haunches in. It was cool to have her soft and bending- even in troll corner. When we went to trot there were no issues at all like we often have with the first transition (although that has been getting better). She simply moved into trot promptly and energetically.  We repeated the same exercises at the trot too. 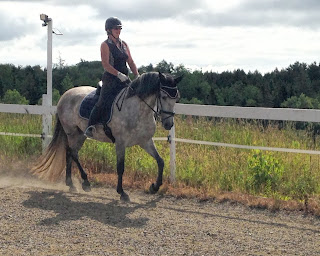 After some initial posting trot, Shanea had me work on my sitting trot. We started off just on the short sides. When Carmen's back is tight it's very hard to sit. But when it comes up it's so much easier. But not effortless because I have to hold myself without tensing. That takes a lot of core strength and I could definitely feel it as we worked. But as sore as I figured I was going to be I didn't want the ride to end because it felt so easy. 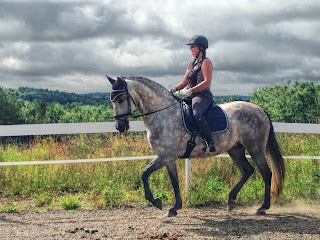 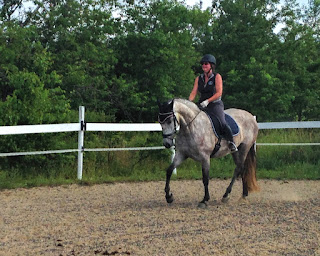 We worked on leg yields. To the right Carmen tends to lead with her shoulder and to the right she leads with her haunches. So I have to be aware of this and ride accordingly. But it's amazing the nuances you can feel when you aren't dealing with a stiff horse refusing to go into a corner. Shanea had us go into the corner, pick up a shoulder fore and then ask for a right lead canter at A. And she picked it right up and we went forward. We cantered around the ring and it was so much fun. Except that she began to go faster then she could handle.  I was to allow the canter but not let her fall out behind or onto the forehand. That was hard to do without clamping or arching my back.

I could really feel her power and Shanea had me sit up and use my seat to get her to keep coming from behind. It wasn't easy for either of us and she broke a few times just because it was so.dang.hard. But we were working together, figuring it out and nailing it.

We finished working on her stretchy walk. When I start to give the rein Carmen will 'snatch' it and then stick her head straight up. I was to ask her to stretch forward and when she 'snatched to put my legs on and ask her to move forward. That really worked and she started to figure out what I was really asking.

We halted Carmen and basked in the pleasure that a good lesson can give. Many times I heard Shanea say 'good girl' and I don't know which one of us she meant but it felt like both of us. Carmen really wanted to stay close to Shanea and tried to follow her. It was kind of adorable.

Tonight, when I was doing the night feed Carmen was highly affectionate and wanted some snuggles. I feel like we starting to unwrap Carmen and letting her out from beneath her layers of anxiety and worry. I know that this is not it- we will still have days that are less than ideal. But for now I'm holding onto today and how good it was.