Cynthia and I had lessons booked for Friday. The weather was lovely in the morning- there had been a skim of snow but the sun was shining and it promised to be a lovely day. Shanea texted me earlier to make sure- turns out that there was a lot of snow in other parts of the province but I promised her that here was fine.

When I went to get Carmen there were a few clouds and the wind picked up. In the ring I started to lunge Carmen and was immediately flying a 1100 pound kite. She was bolting and trying to fly around the ring. I worked at getting her settled and Cynthia came up to the ring.
whoa- she looks a little excited.
It also started to snow- hard little ice pellets.
Oh yeah. Just then my phone beeped- Shanea had texted that she was 10 minutes away (love that she does this). I answered that she might be getting on Carmen first. She had offered before and I thought that this might be good for both of us.

I did get Carmen settled on the lunge. Cynthia moved around the ring making noises while I worked on helping her work through it. As Shanea arrived she was pretty calm but I know her to know that there was still a lot of action under the surface.

I put on the ear piece and Shanea got on. I had thought that she might just ride for a bit but she did it for a full hour. It was wonderful- because of the mike system she was able to talk to me as she was doing things and it was very helpful to listen. Carmen was definitely 'up' and ready to run away but Shanea was very good on her timing and clarity so nothing ever escalated.

I watched Carmen go from up and tight to forward and relaxed. By the end her trot was excellent. And I have media to prove it (I did get permission to post these): 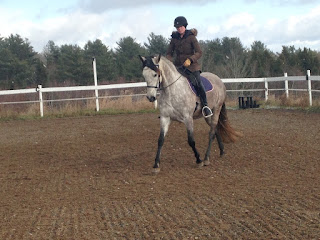 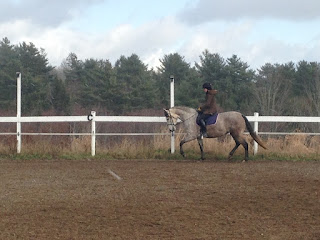 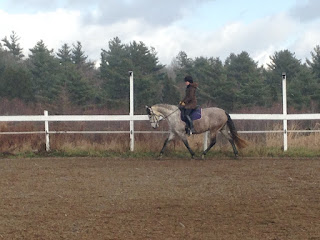 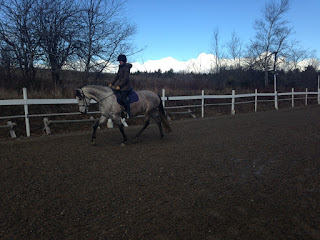 And I got video of her canter. I love how cadenced this was:

That is not 'noise' in the video- that's snow.

In short- no matter what ride Carmen forward to the bit. Help her to look for it. Don't worry about the chomping when she's tight and nervous, just keep your hands quiet. I followed her around the ring as the weather went from sunny to cloudy to snow to back again. The wind was bitter and I was slowly freezing to death. When it was time for Cynthia's lesson Shanea asked me if I wanted to walk her out. I said that it was okay- she had done a lot etc., etc.

The truth was that I was so cold my muscles were tight and I just wanted to get out of the freaking wind. But then Shanea called me a wimp and I decided screw it- I was getting on. AT the mounting block my leg refused to bend to put my foot in the stirrup. Seriously. But once we got walking the circulation returned to my legs. I couldn't believe how soft she felt. It was fabulous. When we headed to the spooky corner I could feel her back off but when I gave a soft squeeze with my calves she just walked forward. I walked her around for a bit and then hopped off.

While Cynthia rode I hid in the heated tack room. After taking care of Carmen of course. She nickered for Irish a couple times but was pretty calm in her stall. I let her into the small paddock and she just stood there eating her hay. I did see a bit of Cynthia's ride and it looked terrific.

Shanea came into the tack room after to warm up. She was full of praise of both of my horses. She said that Carmen had 'so much potential' and I was all 'I know, right?' and inside thinking (don't mess it up!). She also said that Irish was a great horse who really knew his job and was a great horse to learn on. I felt pride for that because I've had him since he was three. Obviously I had help from many people but I was the one in the saddle.

That made up for me feeling a bit like a wimp for not getting on Carmen from the beginning. But that was just my pride talking- the truth is I think it was good for Shanea to get on. It allowed me to see worked for her, it allowed Shanea to learn about how Carmen is and it allowed Carmen to figure stuff out.

On a side note she had some issues going to the right but I can't find any sore spots. It also wasn't evident on the lunge. I'm wondering if her saddle needs adjusting. I shall have to get it checked.
Posted by TeresaA at 10:25 AM