Friday morning my alarm went off and, as usual, I lay there a few minutes listening to the weather report. "The rain has ended for most of the province. Today will be cloudy with sunny periods but very windy with gusts up to 50kmh".

I groaned. I had a lesson for today and I could visualize the whole thing in my head: Carmen and I flying around the ring like some mad kite and Shanea futilely trying to work with us. In fairness- we all know that Carmen does not like wind. Add to the lack of regular work because of weather and it seemed like it would be a difficult day.

However, there was no way I was going to cancel. Shanea had already demonstrated how good she was at getting us to be calm against our better judgement so maybe she would be of use. She has also offered to ride Carmen if things got hairy. Of course it's not me if I don't verbalize how I feel so I put this as my FB status:
You know you have good friends when they immediately contradict you. My responses were along the lines of "it will be what you expect so expect it to be great"and "breathe" (always good advice for me, it's amazing that I don't pass out regularly the amount of time I hold my breath!) and, when I said that I was going to wear my safety vest "good idea".

Even Ed asked me if I was going through with the lesson. I said 'yes' and he looked dubious- won't she be a bit, well, difficult in this weather? He pays more attention then I realize sometimes.

Since my lesson wasn't until 12:45 I decided to lunge Carmen a bit in the morning to see how she felt about the whole thing. The wind was fierce but it wasn't freezing and the sun was trying to come out. She was absolutely fine and I started to feel more optimistic. I only did about 10 minutes in the ring and then gave her a good groom, put her blanket back on and went around doing my chores. I dragged the ring and did a general clean up in the barn (not that it really mattered with the wind stuff just kept blowing around). I had just finished my lunch when Shanea texted me that she was running a bit early.

I headed out to the barn and brought both horses in. Ed took advantage of that to get the tractor in the small paddock and scrape out some of the mud before winter comes and it freezes. I was feeling a bit rushed and I could feel Carmen feeding off of it already. Damn these sensitive mares. I made myself stop and breathe deeply and be calm. I tacked her up quickly (fortunately she had already been groomed) and headed up to the ring. I led her around and she was more looky then previously. Which was my fault. But the sun was out and the wind was settling down.

Shanea arrived then and we had a chat. Now during our lessons, I hand her my phone and she takes photos as we go. I usually end up with over 80 photos that I could make a stop action movie of. How she does that and teaches I don't know but it's great. I keep the photos and study them. I post a few here and on FB but I use them to see how I'm doing. Last lesson I saw far too many photos of me having a tight rein: 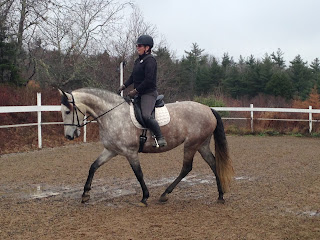 When Carmen gets tight she shortens her neck and goes behind the contact. I go looking for it by pulling back. I'm also preparing for a leap/spin/bolt so it's also self-self-defense. While it's understandable that I do that, it actually is not helpful and will not get Carmen to stretch into contact. Instead I will have a horse who is short and tight in front. I'd been working on it a bit on my own but I really wanted to focus on it in this lesson. When I told Shanea what I saw she completely agreed (in fact she looked relieved that she didn't have to break it to me- such is the life of a riding coach). With that I mounted up and we went to work.

And it was fabulous.

Not everything and not all the time but there were far more good moments then bad. We started on the circle and Shanea talked me through using my seat bones to swing with her back (that's a familiar comment for me too). It was all about positive energy- giving Carmen a task to do so that she didn't have to worry about anything else. We worked our way into the spooky areas.

And it's not that she didn't spook- she did a few times. But they were what I would consider 'normal' horse spooks- ones like 'ack what's that? oh it's okay?phew'  vs 'oh my god trolls we must flee and confuse them by random changes of directions'. The wind died down, the sun came out and it was a beautiful day.

Rather then recap here's what we worked on (as I remember):
-When she gets short and tight don't tighten the rein- put the leg on to get her to go forward and follow the bit.
-Ask her to come down to the bit: not in a forced frame but to bring the alert status down. As soon as she does reward
-use her energy to go forward from behind. Getting her hind end in gear makes it easier for her to focus and carry herself.
-sit up and use my core so that I am a source of balance for her, especially when she's flailing.
- let her have rein, oops not that much she took advantage and pulled, use your elbows/core to keep her from pulling your forward.
-when she bulges her shoulder in, straighten her on the outside rein and use you knee to direct her over, not your hand crossing the whither....

I could feel her lightening and stretching into contact. Her back came up and she worked from behind. the trot, when it was good was like we were floating.
Carmen is wary of the spot we're heading and her head is coming up - but look- slack in the reins and I'm urging her forward. Look at that hind leg reaching under. A few minutes strides later and she's relaxing and looking for my hand: 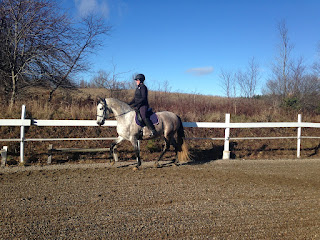 There was a this one moment when Carmen was not thrilled with where we were working and did not want to trot forward. I kept the rein contact light and used my legs to ask her to push forward from behind and she went into passage. It was cool and funny and fun to ride all at the same time. We just kept asking her to flow and finally she went like the training level horse she is. It's nice to know that it's in there though.

Anyway this post is long enough so I will end it with a few of my favourite shots from the lesson: 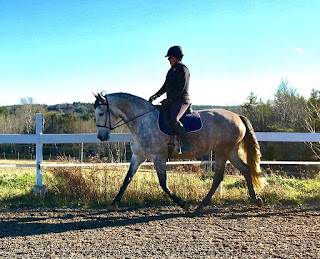 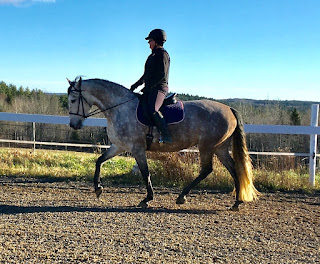 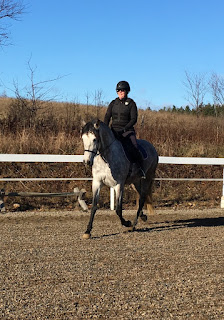 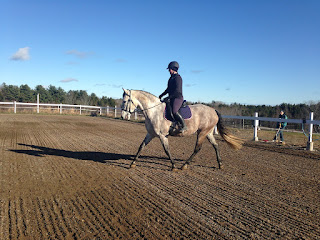 Later I had to confess that my ride had been awesome and I had maligned poor Carmen.