I was still high on the Sunday following my lesson. The sky was promising to clear and the temperature was more like April than February.  So of course I wanted to ride. I tried to talk Cynthia into coming out but she was being all adult and responsible.

I threw in a load of laundry ( just to prove that I was somewhat responsible too) and then threw on my breeches and skipped outside.  Carmen and Irish were at the top of the field but as soon as she saw me Carmen came walking to meet me.

It didn't take long to get her ready and we headed to the ring like two kids at recess. She was perfect on the lunge. I mean it- I kept waiting for her to get distracted and spooky and it never happened.  I had to fix her at the mounting block because she's too far away.  Typically that unsettles her but today it's no big deal.

I got on and she sniffed my boot. I think she could smell Lucera.  We started walking around the ring.  I made sure that my seat and hands were following her and then I played with halts by just stilling my seat. It was easy.  I'm amazed at how easy Otis for her to stop perfectly square. A few of those and she became bored so I started leg yielding.  To the right she leads a bit too much with her shoulder but I corrected that. It's easier for her to the left.  I also played a bit to see if i was correct about the outside rein giving her confidence.  Sure enough- when I let it loosen she becomes tense and more likely to spook. Too tight and she tosses her head. I think I found the 'just right' for her (at least that day).

I asked for a trot and she started a bit balky but her heart wasn't in it so she stopped it quickly. As we trotted I returned to exercise we did at the walk: figure 8 across the diagonal with 10 metre circle at the top and bottom of the 8.  I like it because it works on bend, changing of bend and is just complicated enough to keep her on task.  The first time she spooked up near troll corner.  It wasn't a big one and because I had my outside rein I caught her before she freaked herself out.  On the Carmen Spook Rating Scale it barely registered. We went back and I praised her. The next time she gave a smaller spook and we repeated the above.  The third time I made sure that I pulsed my inside leg and asked her to soften her jaw before the spot and she dropped her head, gave two snorts and completely relaxed.  I did a mental fist pump and gave her a lot of praise.

I won't bore you with endless detail but we worked on leg yields at the trot and transitions up and down. She got distracted on a 12 meter circle and tried to drop to walk but I kept her going.  We cantered both ways and got a bit too bouncy at first and considered bucking. I gave with my hand (not enough so she could get her head down and BUCK but enough so I wasn't blocking the forward momentum), softened my seat and we carried on.

It was one of the most in tune rides we've had on our own and it was fabulous.  There were times last year that I had some doubts- not that I doubted my buying her but that I thought I should have been second guessing myself. Somehow I never stopped believing that this horse needed me and I needed her.  know that there will be some bad rides ahead but I believe that she is finally blossoming into the Andalusian horse I knew was in there. 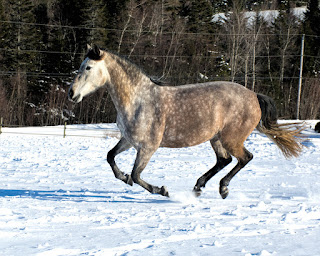