My mom's funeral was monday. It was sweet and simple- just the way she wanted it. I gave the eulogy which was incredibly hard at times.

After the funeral Ed and I couldn't stick around because a blizzard was bearing down on us and we had to get home ahead of it. We made it just as the snow was starting. I was exhausted and slept quite well.

I know it doesn't seem right but I was pleased that there was a blizzard. This meant that today I had lots of physical things to do. Horses express themselves through movement. I find that I am very similar. To have to sit still when I have lots of emotions swirling around is torture. It's not that I can't be lazy- I'm as lazy as the next person and probably lazier than some. But I didn't want to sit around. I wanted to work. 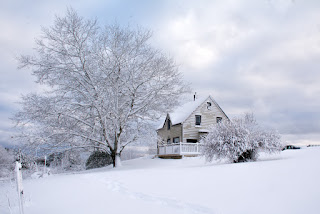 While Ed plowed the driveway with the tractor I shovelled. It didn't last long enough so I began to clean up the hay pile. By this time of the year it's not as neatly stacked as it should be. I also observed the horses.  Carmen is seeming to turn into a snow horse- I find her playing in it but when she sees me looking she tries to get all dignified.

I came into the house and Ed was resting. I asked if there was any more shovelling to do. He looked at me quizzicly and said 'I don't think so'. I still was feeling restless so I grabbed my snow shoes and headed out. The snow was deep and powdery- which is great for cardio. I realized that I'm a bit out of shape for snowshoeing. But stopping to catch my breath also allowed me to take in the quiet around me.
The quiet, the woods, the clean cold air all started to help me do what I probably needed to do- which is just breathe. 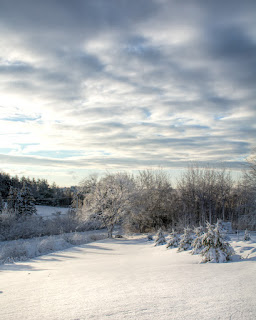 There is a lesson in this for my life and my life with horses. I shall see if I can learn it.