I had originally called this 'operation flappy-things-won't-kill-you' but there were it was a bit too amusing for my FB friends and caused commenting  like 'maybe you should wear a bra when you ride' and 'fix it in time for bare arms seasons'. I have such hilarious friends.

So I went a different way.

After the unplanned dismount the other day I realized that I needed to directly target sacking out Carmen. I have done this sort of thing before but she sometimes has an explosive reaction at times so I want to do some research. I found this video by Warwick Schiller and really liked it:


I liked the idea that you have the horse follow the bag because they are more brave when they are chasing rather than being chased. After watching it I drew up my plan and was able to try it today. The weather was warmer and there was no wind. I took a plastic bag, dressage whip and duct tape to create the torture training device: 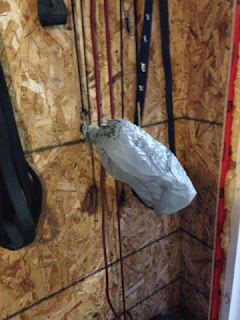 I started with our usual lunging. Once I was sure that I had her attention I put down the lunge whip and picked up my 'bag on a stick'. I started by walking away waiving it a bit. She followed nicely for a half the ring but then I got a bit too enthused with my waving and she freaked out. I lowered the stick and let her canter around me a few times until she settled. I then went back to walking with it held out in front of me. She was obviously not impressed but she followed.

When she seemed very calm I stopped and let her look at it. When she looked I hid it behind me. I repeated this for what seemed like a long time. As we played peek-a-boo with the bag I fought all desire to move it closer. I needed her to approach it- not the other way around. Gradually she started to stretch out her neck towards it. After we did this for a while I walked off with her following again. This time she was much more willing to follow along. I stopped again. After a few more trials of her looking she went up and gently put her nose on it.

And I stopped it right there. We walked out of the ring and she followed the bag. :) Before we got to the barn I dropped it - I didn't want Irish freaking out and undoing my work.

It was a good start. I think I will spend this winter really sacking her out so that she's much more confident about things.

Trust me, it will save both our lives.