I'm sure that you all remember Kindergarten- it's where you learned how to play nice in the sandbox and not eat the crayons (even the yummy looking red ones). The whole function of Kindergarten is to learn how to learn: you have to follow someone else's agenda and pay attention to someone else rather than the voice in your head that is chatting about the birds outside and how nice it would be to climb that tree.

Can you tell that I might have been a challenge in school?

The past several months Carmen and I have been in Kindergarten. Today I realized that we are now moving into the next grade.

Cynthia came out to ride Irish which was good because they were both feeling fresh. I saw right away that Carmen was feeling a bit pushy so my initial work with her (from the initial haltering to the work in the ring) was on listening to me and following instructions. It doesn't take too much to get her tuned in - it's not like she completely ignores me but her responses are ...delayed... Today she was trotting nicely and stretching over her back but when I asked her to walk it took far too long for her to drop down.  I refuse to accept that in our lunge work so I repeat until it's crisp and prompt. I'm okay with giving a horse time to get her feet under her but she doesn't need half a circle.

Our work was all about bending and transitions. She really wasn't too worried about stuff (even  though it was windy) but she likes to bend and look at certain spots. I was staying clear in my expectations and not falling into the trap of getting rough  or of giving up. I keep asking for a bend until I get it and then I stop.

She was a bit sticky in the trot work but I kept going with it and she finally settled into the work. We did some serpentines and circles with me gradually getting into the further corners of the ring. By the time she realized where she was it was really too late to throw any fits. A few times when she threatened to anyway I just said 'we're too busy for that right now' and carried on with what I wanted.

After a few serpentines and changes across the diagonal I asked her to canter.
Carmen: I.can't.do.it. too.hard
Me: yes you can. come on.
We spent a few circles with her breaking or threatening to buck. I finally gave a growl and said firmly enough! Get on with it. And she gave in. I can't get her to canter into the scary corners but we're getting closer and we're going there no matter what gait we're in.

I then went on to leg yield work. Like all green horses she gets crooked leading with either her shoulders or her haunches (mostly her shoulders). it's okay to lead like that a bit but we did get it together nicely a few times at the walk in both directions. I then picked up the trot and we repeated the exercise. It is easier for her to leg yield left then right but I worked on setting her up and then working over and giving her praise for it. After a few trials we had a nice leg yield both ways.

By the end of the ride her ears were flicking back and forth on me and not on anything outside of the ring. I was well pleased with the session and we finished with a walk on a long rein. We then stood in the middle of the ring while I chatted with Cynthia and she did not get impatient. She just sighed, dropped her head and cocked a leg. I walked her over to the gate but we went too far. I tried to back her up and realized that she had no idea what I was asking her for so I left it. I turned around and we came back to the gate - my gate is a board across the opening. I reached down carefully and, while still mounted, lifted the board and let if fall. She never moved. So I walked off three steps and got off. Eventually I will be able to completely open the gate from her back but I don't want to scare her with the idea yet so I didn't push it.

No more spending forever trying to ride the same *^(&% circle. We are moving into Grade 1. 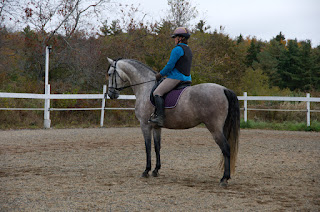