I was recently reading an old Dressage Today article on increasing confidence in the horse. It was very interesting and there was one thing that stood out for me. The author, Scott Hassler, said that young horses prefer clarity over diplomacy. He wasn't advocating being harsh but he said that many riders (most likely Adult Amateurs like me) think that we're being diplomatic in our requests but the horse views them as unclear. He said that we need to be clear what we want and then give the aids to help the horse understand. That made total sense to me. I've been doing a good job of that on the ground. Not that I'm bragging (I'm not and it took a long time) but I am very clear about what I want. In that saddle I have been trying to be 'careful'. Roz pointed out to me that I need to ride more clearly and Karen told me that I need to focus on what I want and ride it.

I took this idea that crystallized in my head and put it into practice. So for my last few rides I've focussed on being perfectly clear and persisting. In our lunge work I've been asking her to stay out on the circle. When she's spooked or nervous she drops her inside shoulder and falls towards the middle. She does this under saddle too. The problem with her doing it when I'm riding is that I can't really control our direction if the shoulders aren't aligned. So she's been able to fall in and run away. I started fixing it on the lunge by flicking the end of my whip at her shoulder when it falls in and asking her to stay out there. Usually it doesn't touch her, sometimes it does (gently). It's been working- she's figured out how to stay out on line and bend through the circle.

When I ride I start off immediately asking for her attention by figures and changes of bend. I don't give her a chance to look around. This is contrary to what I was taught- which was to let the horse walk out on a long rein and relax. For Carmen this has the exact opposite effect. I think it makes her feel abandoned and that she has to make all the decisions. Since she's warmed up anyway from our lunge work I figure it doesn't hurt to start off working. I've been working on riding her hind end and recently decided to tackle the shoulder problem. My last two rides I carried the whip in my inside hand and as soon as I felt her shoulder drop in I asked her to straighten with the outside rein. When that didn't work I gave her a tap on the inside shoulder with the crop.

Carmen is very offended by being tapped with the crop so I almost never use it. However, this really worked because after a few struggles she started to respond to the rein aid and I didn't need the crop. Being able to control the shoulders has allowed me to work on bending and keeping her focussed on the task at hand. She usually resists this at first because I'm stopping her from looking at whatever she's worried about. However, I stay firm and clear in my request that bend to the inside and keep her head in the game (or ring as it were). As a result of this I am riding her everywhere and while she may scoot or spook it's not a huge battle and I ride the spook and carry on.

Today was a cold and very very windy day. Normally this spells trouble for us, especially since Irish is locked in the barn. I figured I would lunge her and decide to ride based on how it went. Grass and trees were blowing constantly- the trees on the far hill were bending over with some gusts. But not only did we lunge I also rode. And not only did I ride but I didn't feel in danger even once. She gave one spook when she fell towards the fence and my leg brushed it. She jumped away from the fence like she'd been shocked. But because I was sitting up and back and had my legs on I just went with her and we carried on. A few times she tried to gawk out at the trees and grass but I asked her to bring her attention back to me. Her ears were like little helicopters flicking towards what caught her attention and then right back to me so see what were going to do about it.

Irish started to call from the barn and all she did was flick an ear. She didn't even change her pace. We trotted down and halted by the evil asters and I hopped off. I've started giving her a small neck massage when I'm done and she stretches out over my shoulder and enjoys it immensely. She especially loves when I rub up by her poll- she lowers her head and gives a small shake when I'm done. I think her little ear muscles were tired from all the hard work.

When our rides are done she's so mellow and relaxed and she will mosey out to the field after like a grown up horses.

One more thing- check out this website: The Reflective Rider. It's by my friend Karen. She has some interesting articles and I always find something to take away. 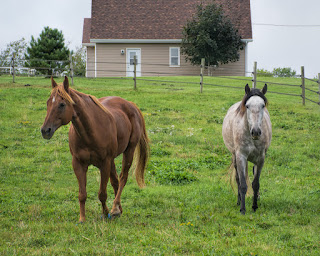