The days are getting shorter which means that I ride pretty much as soon as I get home. Yesterday I rushed home and changed and then headed out the barn. I wanted to get their stalls ready first so I carried on with my chores as I usually do. The horses typically wander down to the barn and wait patiently outside until I'm done and then they come in for supper.

Today though I looked out and saw Irish watching me suspiciously.

Carmen: why aren't we going to the barn to supervise?
Irish:  I don't know. I think she's up to something.
Carmen: really?
Irish: yeah. Normally she's kinda sneaky about it- she doesn't want us in the stall until she's ready.
Carmen: So?
Irish:  Well she's being really obvious. I think it might be a trap.
Carmen:  You are imagining things. I'm hungry so going down,

Irish hung back a bit but came in willingly enough. I closed the outside stall doors and then brought Carmen out to the cross ties.

She was a bit grumpy in the cross ties but I gave her some extra strokes on her head and her eye softened. Up in the ring she was with me right from the beginning. The sun was getting lower in the sky and as we headed up the ring I saw her hesitate. I realized that she was eyeing her and my shadow in the ring. We normally don't see that. What was interesting was that she wasn't saying 'NO' but more "um, what's that? Should I worry? ".  I encouraged her forward and she settled down.

As I mounted a child from next door let out a loud yell but she didn't move a muscle. And then we simply went to work. Now that she's listening to me with the occasional gawk outside the ring (a reversal from just a week ago). As we went up to the far side of the ring our shadow was there as well. After a glance and a hesitation she carried on. It was fun to play with our shadow up and down the ring.

The fence also cast a shadow in the ring so I played with shoulder in using the shadow as a guide. Lateral work like this comes so easy to her when she's relaxed that it's not enough to distract her. I've started working on transitions but she's very clear that i have to ask softly or else she get annoyed. If I ask for a canter too strong she will buck.  She doesn't like them close together- it gets her a bit frazzled, so I do a few and then move on. Her leg yields can be good but she's not always clear that she wants to go over where I want her to go.

Once she picked up a canter that I didn't ask for but I decided to go with it. However, she got a bit strong and I tried to bring her back and she got a bit dramatic about it- bouncing and shaking her head. I relaxed my seat and we all settled down. Before I would get worried that she was going to spiral. Now I realize that she has a dramatic personality and likes to express herself. Roz is coming out this weekend so we'll get some new directions.

Carmen is teaching me that I have to be careful as well as clear. But we will figure it out. 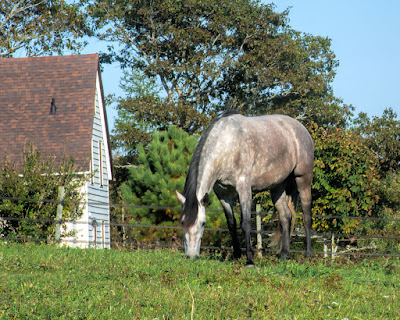