So now that I've changed my perspective with Carmen I've noticed improvements. But it's not all sunshine and roses. What I have come to realize is that I need to evaluate our progress on the day. This graphic is helping me a lot:

On Saturday, she was up and reactive (it was a stormy day and she had 4 days off). I did a lot of groundwork and then got on. She was tense but listened to me and our walk work was very good. Shortly after that it started to rain so I ended and all we had done was walk. But I was happy.

On sunday when I rode we had a pretty good ride. As always she was sticking in her walk-trot transitions but I stayed persistent and calm. After repeated 'asks' she gave a little hop and broke into canter.
Carmen: "There, deal with that!"
Me: "Great idea. Let's canter"
Carmen: "No, you don't get it. You're supposed to pull me up"
Me:  "and ruin such a lovely canter? Never! Let's go. I love cantering"
Carmen: *sigh*

I much prefer a forward gait, even it's not what I asked for then her sucking back through a transition. After that canter she settled into some nice work. We were able to shoulder in up into troll corner and I was quite happy.

Monday I rode again. The wind was quite blustery and she was quite tense being ridden. Instead of being frustrated that I wasn't getting the same great work that I had on the ground I just dealt with what we had. I realized that two weeks ago I would have had to dismount and lunge some more. I wanted to see if we could work through it. And while our work was not great we managed to walk trot and canter with only 2 big spooks. Both of those spooks were a sudden stop and spin and almost unseated me. The first one caught me unaware. For the second she had broke to canter and I decided to let her go to let her release some tension. It was working but I made sure that I was sitting up and back. Thank heavens because she gave a sudden stop and spin and if I hadn't been ready I would have ended up on the ground. But I didn't and we carried on cantering.

She never really settled but she tried to settle. I know that if I relax my seat and go with her motion she really likes it and will stretch and blow. The problem is that I have internalized the idea of a 'still seat' so I have to focus on it. As soon as my mind goes to something else I go back to my more 'stiff' seat. That said, I am okay with that because I know that there is a progression from having to concentrate all the time to being able to do it without conscious thought. If I persist I will get there. I also really tried to not have the reins too short. That is REALLY hard when she feels like she's going to spook at any second. A couple times she stopped and refused to go forward. There was one going backwards episode but I was able to cut that off quickly. Each time I asked her to go forward 'just for me'. I was positive and supportive and each time she did take the step, even though it was against her better judgement.

So our progress is relative but I'm okay with that. I believe that Carmen will teach me to be tuned in and diplomatic. Irish probably believes that it's about time. 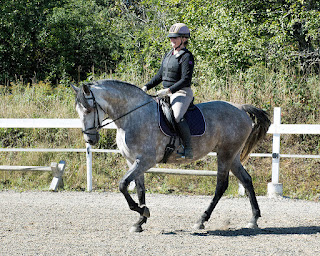