Some Random Things About Carmen

Carmen has been here about 3 months now and I've learned quite a bit about her.

1. She loves to be groomed. Loves it. But she does not like any stiff bristles or hard curry combs. It's adorable the way she stands and arches her neck.
"Make me pretty" she seems be saying. Her coat has a lovely pewter sheen to it (which is not easy with a gray horse). 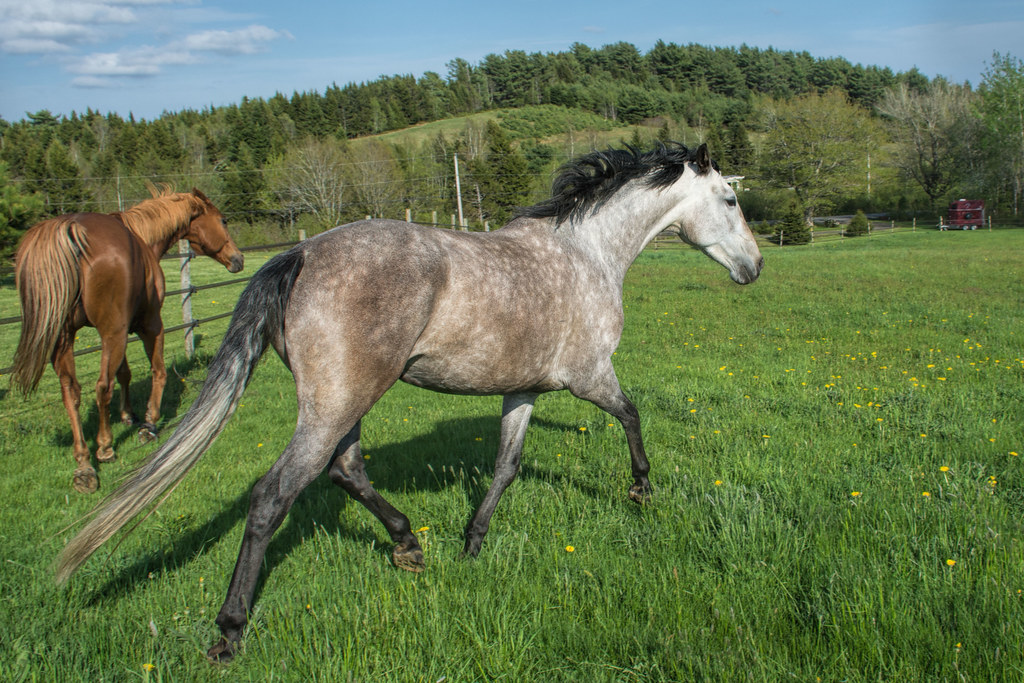 2. She likes to be protected
When spring began I contacted her seller and asked if she'd ever had a fly mask on. Jt turned out that she hadn't so I devleoped a plan to introduce her to it. I needn't have bothered. She seemed to understand right from the beginnig what it was for and she dives her head into it as soon as she sees it. When I don't put it on because it's going to rain she looks at me as though to say "you're sending me out without protection?"


A funny story about flies: a few weeks ago I looked out at the horses and saw a horse fly bugging Carmen. She swished it with her tail and it flew up and bopped her on the nose. Her head came up and she squealed and struck at it with her front hoof. It flew off haphazardly with a concussion. So not onlydoes she not like flies, she offended by them.

3. She's becoming more social.
Every time I go out the field she comes up to see me. Lately she's been blowing on me. When ever she sees me comout of the house, her ears go up and she heads to the fence. When people first began to come around she was stand-offish. She now comes up to say hi and is interested in new people. Overall there's a big change in how she looks at people.
4. She's enjoying her meals. Initially she didn't seem to like just the oats (and supplement) diet so I switched her to fat 'N Fibre with a bit of oats. She's thriving on this diet and is at a good weight- she measures at 1089 and she looks good. But she does this weird bite thing when I feed her- her first bite is a sharp chomp. After that she eats like a civilized creature:

All I can say is that it must have been tough to be her mother when she was nursing!

5. Bushes are scary, rabbits are not.
I forgot to tell you this story during my ride on Saturday. We were just turning up the quarter line (by Irish) when a small rabbit came flying out of the grass and booted it across the ring. I was surprised and jumped. Althought I would have expected her to startle and try to get away, Carmen just looked at it calmly and then carried on. Horses. But it tells me that I'm not crazy when I think that she can become a steady and calm mount.

Irish took his time to bond to her. I think he had too many sudden changes in companions and was not sure of her. However, they have become good friends and he ignores her signs of 'heat' like he's supposed to.

This is what I saw when I came home yesterday.


I must say that she's settling into to our little farm. I think that she likes the calmness of it.
Posted by TeresaA at 1:13 PM