So I wrote about my last two rides and how I was doing my best to be consistent in my work with Carmen. Now let me tell you about the last two rides I had.

Yesterday (saturday) my mother, brother and two kids came for a BBQ lunch. It was a beautiful summer day and it was wonderful to sit on the deck and eat and talk and laugh with family. My mother is quite taken with Carmen and she was excited to meet her in person. Around 6, Cynthia arrived and we got the horses ready. Irish was a bit off so Cynthia took him  up to walk him and see if we could see what was going on. (With his difficulties it's hard sometimes to tell whether is something new or a flare up of the old. ) I wasn't going to ride but Cynthia insisted.

Carmen started off well on the lunge. Troll-corner got her excited but we kept working. When she seemed to be settled and listening I took her over to the mounting block. Something got her a bit excited so we spent some time there working on standing. Finally I mounted and we started off. Irish was grazing at the end of the ring and she was pretty sure that that's where we needed to be as well. I was pretty sure that that was NOT my plan. This led to some discussion but I'm much better with disobedience than I am with fear. There were much fewer monkey-riding-a-giraffe moments and some really nice work.
'when she's listening she moves so nicely' Cynthia remarked. And she does. I asked her to canter on the left lead and we had a great time moving up and down 2/3rd of the ring. I'm working towards troll-corner under saddle- I don't think we need to have a confrontation at this point. After a brief break I asked her for a right lead canter. She bucked into this transition so I brought her back and asked again. Another buck, but less. She seems less balanced to the right so I worked on trying to get her to relax into the gait and not go quite so fast. We did have some balanced moments.

On our walk break I introduced leg-yielding. Right now she interprets any leg as 'go faster'. I want her to differentiate between leg aids. I was pleased with how she was focussing on me and not on everything else. (Including Irish). We finished with walk-trot transitions- I wanted her to respond to my seat and she's so sensitive that she did very well with that. I called it a day and we went back to the barn where I gave them supper. As I came to her with her dinner she nickered at me. Thank heavens, I thought that we might have missed supper!'

Rain was predicted for sunday so I tacked her up early to make sure I got my work in. I left Irish in the field. She was perfect in the barn even with him far away. This is marked progress over her freaking out if she couldn't see him at all times. In the ring she started off calmly on the lunge. We worked our way up to Troll-Corner. That led to more excitement but I just kept calmly working. We changed direction and went back up and down the ring. The next time in Troll-corner I saw a switch flip in her brain and she started to trot calmly and without fuss.

I put on her bridle and mounted up. I find when we first walk off, her walk is hurried and tense. I worked on trying to get her to slow down and relax. We carried on with what we had worked on yesterday: walk, trot and canter, steering and acceptance of contact. There was approximately 2 discussions about which way we should go but she gave in pretty readily. We got the closest ever to troll corner. I had a few bucks on the right canter depart again. I think it's a mix of it not being her best way (it's not there on the left) and I may be tensing as well in response to her. We'll work on it. I have to say that the Zumba I've been doing for the last year has really strengthened my core. I can sit up and strong and not be moved by her crow hops (they are not big bucks) and sit steadily even when her canter rhythm is not so balanced. Not that I'm perfect- far from it. We even spiralled in on a circle and leg yielded out (at a walk).

I am very happy that we are headed in the right direction. 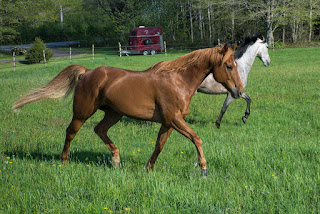 --------------------
As for Irish- he was sound on the lunge but did not want his left hind touched. I gave him some bute with supper. This morning he was the same and I could feel some head on the inside of his hind leg above his hock. I don't think that the heat was there yesterday but it was very warm so I might not have noticed it. I gave him more bute and he seems much better tonight. I think he must have pulled it in the field.