My battle with the trolls has it's ups and downs. We've pretty well banished them in our ground work but they like to rattle the bushes and growl once I mount.

I try to convince Carmen that she's most likely hearing these: 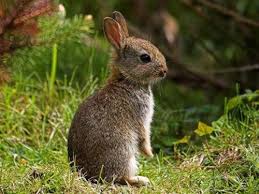 But she believes that that is just a disguise masking their true nature:

But I persevere and we're getting there. I am pleased with our progress at the mounting block- for the past 3 rides she stands completely still while I get on and does not move off until I ask her to.

Today I rode in the morning and it was windy. I have ridden her the past 4 days so I was not expecting her to be as lively as she was. She bolted a couple times and was not tuning into me at all. It took a lot of patience and work to get her to focus on me. I was sure she was ready and I took her over to the side so I could remove her halter and put on her bridle. Just as I was going to slip the bit in Irish went bolting down the field which got her all agitated. I had a choice- keep trying or slip off the bridle. I opted for the latter. I knew that she might run off but I thought that was better then her bolting with a bridle dangling from her neck.

But she didn't run off and I slipped the halter back on and we went right back to work. This time I didn't let give her any space to think, as soon as her attention wandered I did something to get it back. She was not impressed but I made sure to keep the pressure on until she did as I asked then I immediately took it off.

She's smart so it didn't take her long to figure it out. Once I saw that her attention was locked on me and not wavering I went back and slipped on her bridle. At the mounting block she stood stock still (yay for patient work) and we went to work.

Of course she was worried about the trolls but every time her attention wandered I asked her to do something that caused her focus to come back. I realized that because she's so good in the non-troll parts I've been giving her breaks there and that was simply reinforcing her ideas of  'good/bad'  sections. So this time I made sure that all of the breaks I offered were in her spooky spots. If she wanted to carry on she could but I was giving her a chance to relax there. I'm not sure if I'm explaining it right but it seems to be working.

Yesterday was much better than today but yesterday was also not windy. We were able to work right into troll corner without mishap. I just kept a soft feel on her mouth and let her know that I had her and it was all okay. Today was not as good but then again, a few weeks ago I don't think I would have gotten her to a place where I could have ridden her.
We finish with a halt in the corner and I dismount.

Later I went into the field to take some photos of them. There's a storm coming and I believe that they were feeling it. 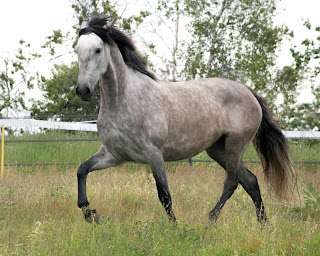 I saw this picture and it gave me pause. It looked so familiar. 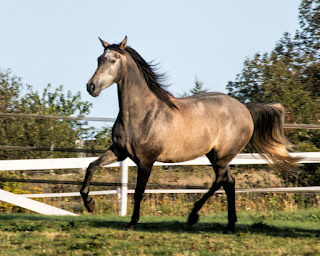 same location in the paddock and everything.

It's not that it gives me pain,  I loved him very much and it's like his spirit is still here.
Posted by TeresaA at 4:06 PM