Making Hay While the Sun Shines

I used to think that the phrase meant that you should have fun while you can. Now that I have a small farm I realize that it's more about work than pleasure.

Canada Day is tomorrow (yay) and I was off on monday so was looking forward to a nice long weekend.  My daughter is moving to her new apartment tomorrow so we were planning to help with that, otherwise the weekend stretched before us full of sunshine and warm weather. I could hardly wait.

And then on saturday the guy I get hay from called.
"I'm cuttin' hay this weekend. How much do you want?"

Dang. There goes the plans. I have not been successful in finding someone who delivers (well who isn't prohibitively expensive). So getting in hay means that we have to go pick it off the field. And it means hanging around waiting for the call that it's ready. We talk amounts and timing. I've adamant that July 1 is out because of the move. He figures that Monday 'sometime' will work.  So monday is a scorcher of a day. That morning Ed and I work on some chores. Mostly we work on the fence. There was a short somewhere. We figured it out and fixed it. Ed showed me how to make lead wires that connect the electric from one to the other.  I was banging the wee metal bit onto the end of the  lead wire- and feeling pretty accomplished when Ed walked in barn. Right then I banged my thumb with the hammer.

Did you clip it? He asked.
"yes"
"You're going to get a blood blister"

Just then blood starts dripping out of the end of my thumb. I try to finish putting the thingy on but Ed tells me to go into the house and get a band aid. Fair enough- I was bleeding all over the stuff. I headed into the house leaving drops behind.  We finish the fencing work. I am now proficient with the electric drill and wiring fences. The horses were quite amused by the whole thing.

We then have  to have a quick lunch before heading out to the get the hay. The only thing to cook quickly is a box of Bagel Bites. I guess I need some groceries. At that point a dump truck towing a backhoe drives into our property.
uh oh.
It's Kerry. He's the guy we hired to do the foundation for the garage we're going to build. Fortunately he's just dropping off the equipment. I talk to him about a couple other things I want him to do- bring a load of sand for my ring and grade outside the barn so that the water runs away from the barn rather then against the door. We chat a bit, scarf down the bagel bites and hitch the trailer to the truck.  It's about a 15 minute drive to the field and we start to load the hay. With the truck we can get 50 between the truck and trailer. Since we're picking up 100 it's just 2 trips. However, it's hot and heavy work.  We bring the hay back and unload it and stack it in the barn.
We replenish the water bottles and head back to the field.  We get the last load and bring it back to the barn.  At this point the sun is beating down, we're hot and sweaty and scratched by the hay bales.  At one point I'm in the truck waiting for Ed to shut the trailer so I can drive on. The minutes drag on- I check the mirrors, no sign of Ed. I wait a little longer. Suddenly fearful that he's had a heart attack back there I leap out of the truck and head to the trailer. He's inside texting. WTH? I ask him. I might be a little cranky. We both draw on the last vestiges of strength to get it done. I climb into the back of the truck and pitch it over the side so that Ed can stack it.

As we're working Martin the cat saunters in. There's nothing to make you feel more like a minion than a cat who casually lays on a bale of the new hay that you're stacking to check it's comfort level. And then looks at you as though to say 'you're not going to move this are you? I'm just getting comfortable" For a minute you think 'oh poor kitty I won't disturb him" 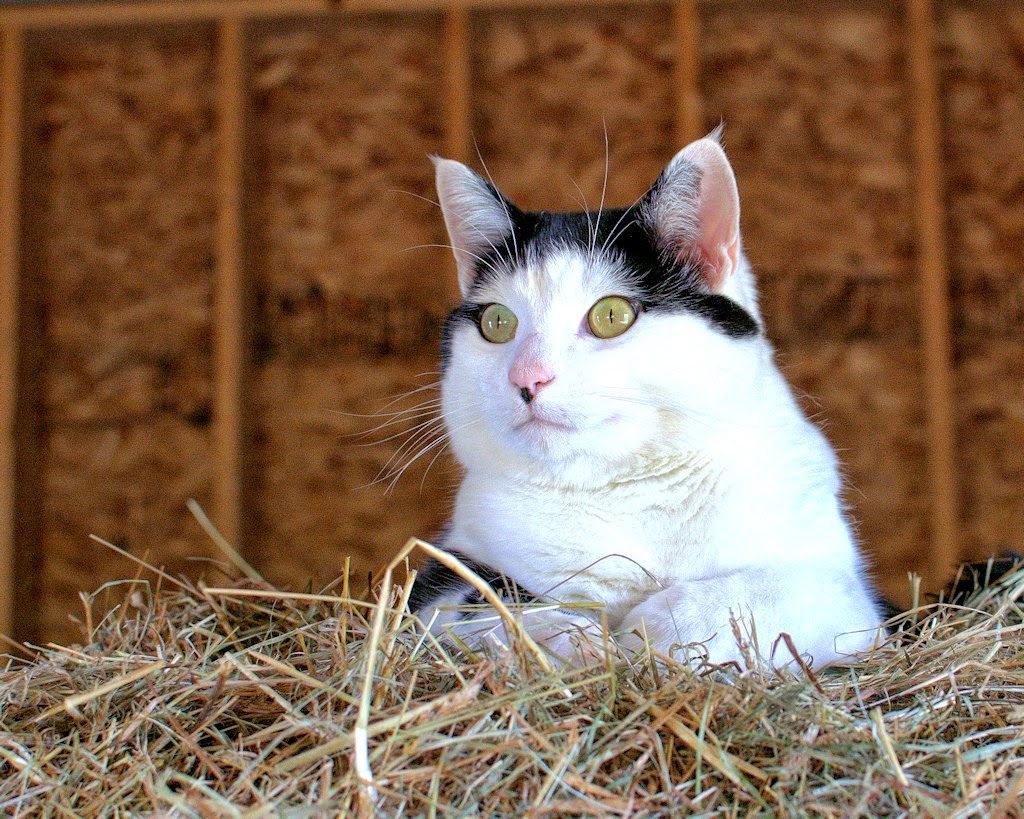 I gave my head a shake.

Finally it was done. I then took the trailer to park it and Ed went and got the tractor. It seems that he promised his mother in law manure while we were heading to the city to move Amanda. He brings it out with the tractor and loads it into the back of the truck. I realize that we won't be able to get the cover on unless it's levelled out. I climb onto the back of the truck and try to smooth it out. Ed watches me and I see that he had a smirk on his face. I look at him "if I fall into this pile of manure you're cooking supper"  He smooths out his face and says earnestly "I was planning to cook anyway" But I suspect that he's thinking that it would be worth it.

Now it's time to feed the horses and sweep up the barn. I head into the house to have a shower, stopping by the laundry room to strip- there's hay everywhere. I catch myself heading to the door to shake out the socks that are full of hay and stop- realizing that I'm naked and perhaps should not open the door and traumatize whoever happens to be driving by.

I am now sitting here, clean, exhausted and sore. But there's hay in the barn and I have my horses home so it's all good. Maybe I'll get to ride tomorrow.