That's right, we did it!

A few blog posts I wrote about how I was waiting for the right moment and that was yesterday. Let me bore you with the details.

On friday I worked with Steele and he was going pretty well. We were having some issues with transitions- they seemed to be much more work than necessary for both of us and he was getting a little stressed by it. So I thought for bit and realized that I needed to make it more clear and more simple. So we spent 20 minutes doing walk-halt-walk transitions from just my seat. I doubt very much that I can describe it well but my method is at the walk to allow my seat to move with him and when I want him to halt to stop my seat. My goal was to do a walk- halt with no reins and halt-walk with minimal aids (a small little bump with the calves). As we went into this work he was all distracted. But I stuck with it patiently and he began to settle. As he settled, it got easier which leads to more settling. In the end I had a horse 100% focussed on me and responding beautifully to lightest of aids.

There, I thought, we are ready for a walk-halt dressage test. As long as it doesn't require any steering accuracy.

On Saturday, my friend Cynthia came out to ride Irish in the morning. Steele stood in the cross ties like a old pro. I commented on it to Cynthia and she said that she thought that Steele had an old soul. In the ring we went to work. After some ground work I got on. I could immediately feel the difference from the day before.We were able to practise steering and transitions. There were a few bobbles- once when I planned to go left and he thought we should go right (where Irish was) and our conversation went something like this;
Me: and we go left
Steele: I think right is better
Me: no it's LEFT
Steele: you go left, I'm going RIGHT
Me: LEFT
Steele: RIGHT
Me & Steele: CRAP, FENCE!
At which point we did this spectacular and heretofore not recognized dressage maneuver called 'spaz left'.
I had to laugh as we headed down the fence line. 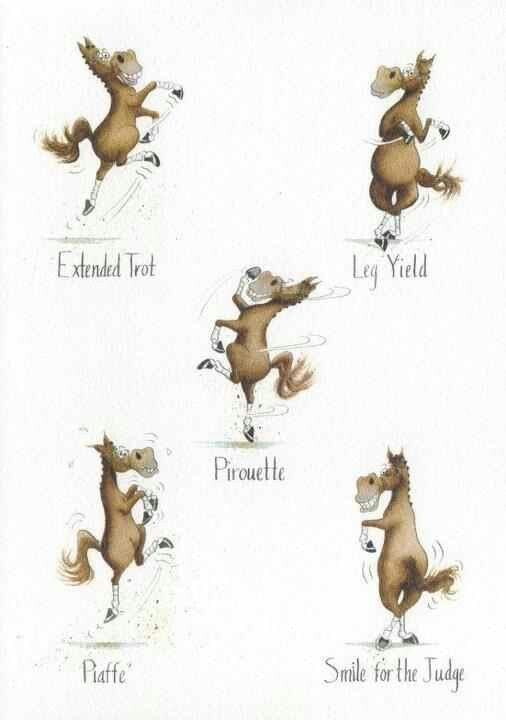 Another time a horse fly landed on his nose while we were trotting around and he was trying to shake it off but it wouldn't budge. He first tried to drop his nose to rub on his leg but he couldn't so then he tried to bring up his foreleg to rub his nose! As we were trotting he was flinging his right foreleg up by his nose. I decided that stopping and letting him get the fly might be the safest of options.

A few minutes later as we were trotting a lovely circle to left I decided to try the canter. I made sure I was steady in the saddle and said "annnd can-TER" just like I do when I'm lunging him. He flicked an ear back.
um, what?
I repeated the canter and gave a little bump with my calves. Steele trotted even faster.  I steadied him and asked again. He picked up a canter but it was the wrong lead. No worries. We cantered a few strides and I brought him back to trot. I gave him a pat good boy because he did what I asked. The wrong lead was a balance issue. We settled back into our work and I asked again. He broke into canter but dropped out after a few strides. Not a problem. I gave him a pat and we took a walk break.
I then switched direction and once the trot was going I asked again. this time he picked up the canter and kept going. I worked very very hard on keeping my seat light in the saddle and my reins slack so he had room to go. I could feel him trying to figure out how to do this with me on his back. After half a circle I asked him to trot and then back to a walk. I gave him profuse praise and then left the canter alone. I just wanted him to get the idea that we can canter. I can build on it over time.

My friend Cynthia saw what we were doing. She said it looked pretty good. Which is good to know because it felt a bit discombobulated.

We did a cooling out walk.  As I dismounted a horse fly began bugging him under his stomach. But he stood perfectly still while I got off and then tried to get it. I took my crop and rubbed it under his belly and one flew away. I figured I got it but he was still swishing his tail between his leg and kicking up. I realized that there was a nasty horse fly on his 'tender bits' and I got it. He looked at me with supreme gratitude.

If it's not clear by this point- I am having a ball on this journey.