A Spoonful of Sugar

Sorry, I couldn't resist the title. Mary Poppins is one of my favourite movies (and books when  I was young). The musical is coming to Halifax and I can't wait to see it!

A few weeks ago my vet came out and vaccinated my horses. I am a strong believer in vaccines for animals and people. There are a lot of topics that I will avoid because I know that the conversation will get heated and usually there's no point. Except for vaccines. I will engage in those conversations simply because I can't let such misinformation go unchallenged.

To return to the topic of vaccines. My vet always leaves the strangles vaccine to be administered later. Otherwise he worries that it will get into the wound made by the needle. I have no problem administering it and I always wait a few weeks. I know that not everyone believes in giving the vaccine but many years ago I had a chance to see close up how horrible Strangles is.

I bought my first horse from the people who owned the stable I was taking lessons at. It turns out that they weren't good people but that's another story. They agreed to board a couple horses who were being taken in by a local rescue. Rather than quarantine these horses they put them in with all the others. It turns out that one of them had Strangles and it rampaged through the barn. My horse got very very sick. When the vet came out he mentioned the vaccine. I was so naive in the ways of horse ownership that I had believed the stable owners when they said that they arranged for the vaccines of the horses (when no one was there) and would make sure my horse got his shots. Turns out they didn't get the Strangles vaccine. I was shocked and upset and said that had I known I would have paid for it. Their response was that it was all my fault because I hadn't asked for it. My poor horse was quite ill with high fever, swollen glands, trouble breathing and he couldn't eat for many weeks. I was also sick with guilt and anger. He did recover but he always had a residual cough.  I learned 3 things from this incident:


I had the vaccine in the fridge and was waiting for a time when Ed (or someone else) could assist. I wasn't in a real hurry but then  I heard that there is Strangles outbreak so when I returned from a work trip on friday I decided that it had to be done. 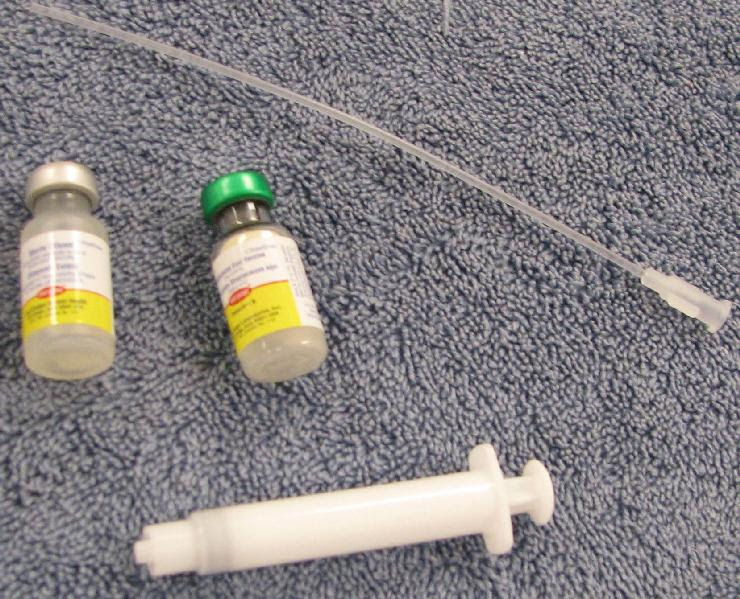 It's quite simple to mix:
This straw needs to go up the nostril of the horse and then you depress the plunger. That's where you need the assistance as horses don't really like things going up their nose and it's hard to explain to them. We did Irish first. He was easy- he didn't even flinch when I put the straw up his nostril and happily took his carrot reward.

Steele however was not so sure how he felt about all this. We put on his halter and brought him in. He immediately began to fuss and prance but I hadn't done anything so was confused. I then saw that Ed had a death grip on his halter. "Don't hold him so tight" I said. He gave me that exasperated look that only those that live with you can give. I laughed. "I know that I asked you to hold him and now I'm telling you to let go but think for a minute. If I suddenly grabbed you and held your arms tight your first response would be to pull away. So relax your hold unless he pulls back". Fortunately that made sense so he relaxed. However, every time the straw approached his nose he pulled back and shook his head.

I tried a few times but he was too nimble with his head and figured out that he could blow the straw out too. It was becoming remarkably similar to trying to get a toddler to take his medicine. He wouldn't even allow himself to be distracted by the carrot.  Hmm. I do have a twitch but didn't want to stop and get it. So I took my hand pinched his upper lip and while he was looking at that put the straw up and depressed the plunger. It was over in 2 seconds. His lip curled up and he blew - right in Ed's face. I tried to not laugh. I had expected that so was off to the side but forgot to warn Ed (don't tell him, k?). He happily took his carrot after that and didn't seem too upset by the whole thing.

But now they are fully vaccinated and I can breathe a little easier knowing that I've done my best to keep them safe.