All this week I've been letting the horses out for a couple hours on the good field in preparation for them moving out there full time. Every morning all week Irish would come out of his stall and stand by the gate that opens onto the grassy field. When it didn't magically open he woud make faces at it and even tried to go through it once. When he got a shock he was not impressed.

He would look at me:
"open the gate"
"not yet. the grass needs more time"
"It looks fine to me"
"Look Irish, the grass needs a bit more time and I need to be careful moving you over. You've eaten down most of the grass as it came in and you wouldn't want to colic would you? You'll get some time this afternoon."
"All I hear is 'blah, blah, blah'. OPEN THE GATE"
"No! Go eat your hay"
"what? that stuff? I wouldn't feed that to the dog"
"You liked it before"
"that was then. This is now. OPEN THE GATE"
"No"

We had this conversation every morning. Steele stayed out of it. They learned quickly though that the gate opened late afternoon. They started hanging out there. Irish even has his afternoon nap there so he wouldn't miss it opening.

Saturday dawned clear and sunny. Before I opened the stall doors I took down the gate to grassy field.

Irish came out and started to head to the old field, looking resisgned.
Then he stopped.
He looked at the gate.
He looked at me.
I could see him thinking: "The gate is open. I wonder if she knows?"

With that he started to slink towards the gate. Keeping on eye on me and trying to make himself as small as possible (which is not easy when you weigh over a 1000 pounds and are 16 hands high) he snuck out the gate.

At the other side he dropped his head and began to eat grass like it was his last meal. All the while keeping an eye on me and ready to scoot.

Meanwhile, Steele was doing what he does every morning- going in Irish's stall to see if he left anything behind. 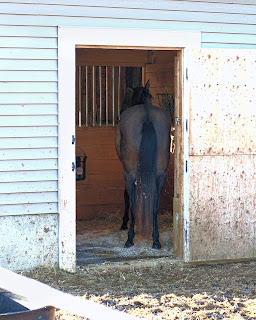 When he came out he saw Irish in the field "oh score. We can go this way now!"