Not only am I owned by 2 horses but I also belong to two dogs.

d'Arcy is my border collie. He's lovable, goofy and essentially a lab disguised as a BC:
Belle is my Australian Shepherd. She's a rescue. We got her at 4 years of age after losing our beloved Aussie. She had spent most of her life up to then locked in a cage. She's adapted well to being a princess but has a few issues that require management. When we first got her she would go into defensive barking and growling and would even bite any young man that came into our home. I suspected that she had been teased/abused by young boys because that was the population she reacted too. Now she's pretty good but we are careful of her around guests. Her other issues is dogs. She's not that keen on other dogs. She's also lovable, smart and beautiful. 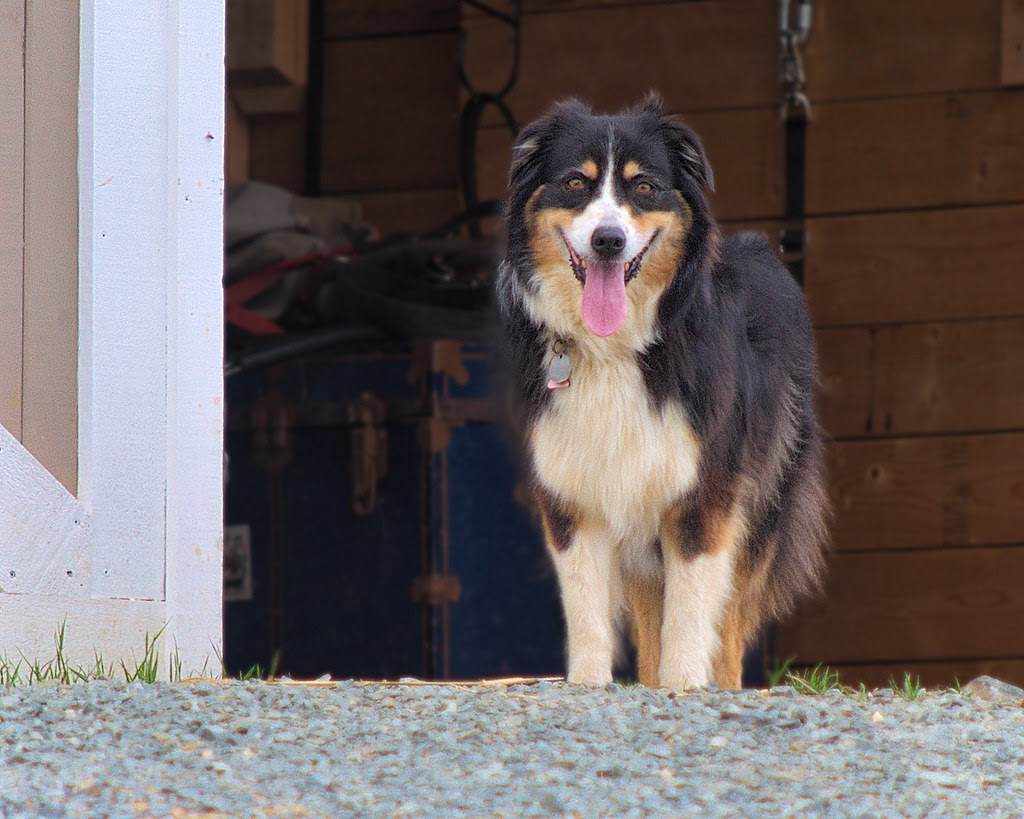 Last month I was in my bedroom when I spied a canine in the horse's paddock. I thought it was a coyote at first and then realized it was a dog. I then spied the woman from next door calling the dog who came home. Later that day the dog returned. d'Arcy was already outside but I left Belle in the house. I went out to feed the horses and the dog hung around. He seemed okay and quite interested in d'Arcy. After I fed I started walking to the neighbour's house with d'Arcy and the new dog following. I met the woman part of the way. She commented that it was weird that he started coming over after we'd been here for a few years. He is an Australian Cattle Dog named Cooter.  I told her that the horses would chase him out and might kick him. She said that he was used to horses and should be okay. sigh. I then said that while d'Arcy was fine my other dog would likely attack. I just wanted her to be warned. She said okay and then took him home. In the rural area of Nova Scotia people often let their dogs roam.

Fast forward to a few days later and Ed says to me 'when did Belle make a friend?"
"what friend?" I asked.
"that dog" he answered. I looked out and my jaw dropped. There was Belle playing with the new dog. I went outside and they were having fun. The only thing I can figure is that he has such a calm energy that she was not intimidated.

Since that time Cooter has been a regular visitor. He really is a lovable sweetie.

Today when I was driving home I saw Cooter heading along my fenceline to his home. His whole body posture screamed 'sad dog'. As I drove by he stopped, looked at my car and his eyes lit up. I drove in my driveway and looked over to see him trotting with his tail up and his body language saying 'oh good you're home. Can d'Arcy and Belle come out to play?' I let them out and they all had a play. After I had done my chores I took the dogs on a short walk. Cooter came along and then I heard a jingle. Martin the cat decided to come too. Feeling a bit like the pied piper off we went. d'Arcy and Belle were tearing through our woods sniffing everything. Cooter stayed close to me and Martin followed close behind.

When I got back to the house Ed was driving in. We went into the house and Cooter stood on the deck. Ed looks at him and says 'it's time to go home Cooter'. Off he trotted to home.

Country living is full of surprises.