I know that it's been a long time since I posted. To be honest, like many of you, I am in a bit of a funk. Partly it's simply 2020. The other part has been that there has been a regression in Carmen's behaviour. I wasn't feeling up to writing about it because you will all think I suck. But what's the point of a blog if I can't be honest? So here goes. 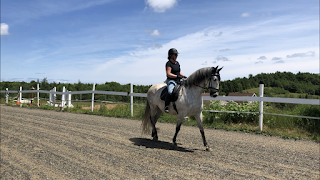 She's been quite difficult to ride and we've had a few 'come to jesus' moments.

It's not been fun.

As always, with horses it's a struggle to figure out if something is physical or behavioural. I began her on ulcer meds but it really didn't seem to make a difference.

I won't bore you with details of all my rides. Roughly they consist of good moments with bits that are total shit shows: retracted neck, tight body often followed by a spin and bolt.  Or balking with threats to run backwards or go up. Note: Carmen has never reared on me. She has felt light in front and I've reached forward and bopped her on her poll which put the end to that.

After a particularly frustrating ride I was pretty bummed. I did some deep thinking and I realized that I was giving Carmen power over my emotions. I wouldn't let anyone else dictate my feelings in that way. I knew that I couldn't let that continue or else we would continue in our downward spiral. Also, there has also been lots of good things in our training and I can't just focus on the negative (which is totally against my goals).

I took a step back and began to spend some time grooming her. She responded well to that so there may be a bit of pressure related. It is possible that I was focussing too much on work and not enough on relationship stuff.

Shanea wanted me to try lunging her in side reins. I had been resistant because it's easy to teach a horse to lean. But what she wanted to do was to get Carmen to learn to reach for the bit without a person on her back. I tried it during a lesson so that Shanea could help me. What we realized was that as soon as the side reins went on Carmen became tight and defensive. Which makes me wonder if she had them in the past. However, we kept them quite long and with some work she began to reach for the bit.

The lesson was useful because Shanea was able to see the groundwork I do and how calm Carmen is before I get on. At a spot that was perfectly fine on the ground she flatly refused to go by. I had to get quite harsh with her - pressure on until I felt her think forward and then take it off.

I tried it again today and she started the same. This time I loosened the side reins even more and she began to stretch and reach for the bit. It got me wondering if Carmen really has a good understanding of contact. Which is stupid to be wondering at this point in her training I realize but hey, better late than never.

My ride today was also really good. She had one bobble at the same spot as yesterday but i gave her a squeeze and a tap and she went forward and that was the end of it. The ride was really good and every time she retracted her neck I kept the reins out there and put my leg on (or gave her a kick) to send her to the bit. My defence mechanisms tend to kick in when she gets tight because I'm anticipating a bolt and want to stop it. One day I might be over that tendency.

I still don't know if we're getting through this bobble or it's just a temporary truce. But I feel better about things. To quote John Legend:

"What's going on in that beautiful mind?

I'm on your magical mystery ride
And I'm so dizzy, don't know what hit me
But I'll be alright
My head's under water
But I'm breathing fine
You're crazy, and I'm out of my mind
How's your summer going?
Posted by TeresaA at 8:47 PM