Before I get into my post, last week a surprise arrived in my mail from Nicole. Not that it should have been a surprise. I just forgot that I won the foal pool.


You know, for a person who probably thinks far too much I can still do some pretty stupid things.

My rides on Carmen have been going really well. Which led me to become a bit complacent.  Add in the decrease in riding because of, well, late autumn (and the weather sucks and it's dark and cold and rainy) and add in a mare that does not like to be taken for granted and you can have a recipe for disaster.

Spoiler alert- no one was seriously hurt.

It started with me wanting to get a ride in on Sunday morning before the young woman who is learning to ride Irish came out (that's a different story).  It was sunny and a bit windy.

I should have lunged first but I didn't want to didn't think I needed to.   Carmen seemed fine at first but lost no time in telling me that there were trolls on the far side of the ring and she was having none of it. I kept trying to work her through with some success but nothing that stuck.

I was getting a bit annoyed but wanted to get to a good point and be done. I began to work her really hard at the gate and then offer the far side as a place of rest. She wasn't buying that at all. But I figured she would figure it out. The young woman came and I told her I needed some time.

So I'm working Carmen at the gate and then she does this nasty little deke to the right and then a big swerve to the left. I was completely unbalanced and there was no saving it so I let go and fell to the ground cursing as I landed. I jumped up, asked the young woman to get my lunging stuff and the proceeded to lunge the crap out of Carmen. I know that I was at fault here too but that was a nasty little move and I couldn't let be the end of work.

Once she was worked hard, I hopped back on and cooled her out at the walk all over the ring.

I wasn't hurt but I was annoyed at myself. The signs were there and I ignored them, figuring it would all be fine. I also started to think back about when I had last done our groundwork and I really couldn't remember. 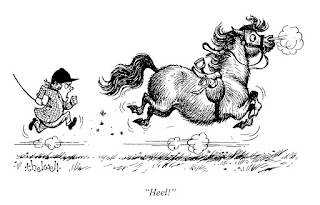 The next day was a Remembrance Day and it's a holiday here. In the morning I went out to get Carmen from the field. I always walk out, stop and wait for them to turn to me and come towards me. Carmen looked at me but was a bit reluctance.  I just waited for her to relax and then I put her halter on.

We headed up to the ring and I had all my stuff up there. We spent the next 30 minutes or so reviewing all the groundwork exercises: following, backing up, the clock exercise, dealing with plastic bags and noise makers. As we worked we fell back into our easy companionship and I realized that it was missing before. I turned her back out to chill for a couple hours.

I turned her back out and headed to the ceremony. I rarely miss it but now with my son in the Air Force and going to Kuwait soon it has more personal meaning. 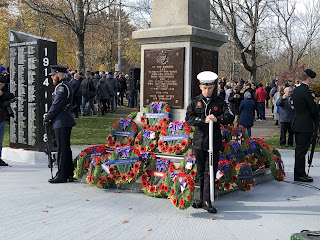 After lunch I got my tack ready and went out to get her again. This time she saw me and came right to me with an open and happy gaze. I tacked her up and we went up to the ring. I lunged her a bit first but she was fine. So I hopped on and guess what?

Not that she wasn't worried about the same areas but she wanted to know my opinion of it and then listened to that opinion.

And our session was awesome. Since then she's been tuned into me and happy for me to groom or lunge her.

Lesson learned (at least until next time). 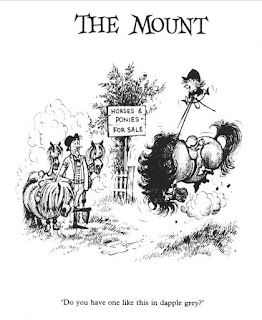